THE DEVIL’S TRUMPET IN UTAH 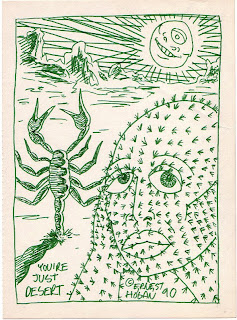 Last summer, Em and I, and some friends from Tucson (he’s an inventor and his wife is a DNA analyst) rented a gas-guzzling monstrosity, and headed for Denver WorldCon by way of the National Parks in Utah. After the roadtrip, the WorldCon was a disappointment – the science fiction world is a wasteland these days – but all that fantastic geologic splendor ! Talk about inspiration. Em got an idea for a novel and wrote over ten thousand words on the road and at the con. I got some ideas for my Nanohudu Mars stories.

But then, that’s not what I’m getting at here.

I kept noticing this leafy weed-like vine growing by the side of the road. It had white flowers that had fang/horn-like things sticking out of its petals. It looked a lot like datura, the infamous hallucinogenic plant that the Mayans used in enemas that made them feel as if they were flying with strange winged creatures, like what Tahir Shah wrote about in Trail of Feathers.

Em mentioned a similar-looking plant that it could have been. I was willing to go with it. Hell, I’m not an expert on such things.

Later, on a tour bus through Zion National Park, the driver mentioned the funny white flowers. She them "sacred datura." She also warned us against touching the flowers because they are highly poisonous.

I kept an eye out, and kept seeing datura growing wild and flourishing, and the roadside, in National Parks, even among the decorative plants along the main street of Moab. I thought about the Mayan datura enema while eating in two restaurants that had the diabolical plant growing in front of them. One of the restaurants even offered some Mayan dishes.

Which all makes me wonder . . . with all the blood and money being spent on the War on Drugs, and a useful plant like hemp hunted down as Weed With Roots In Hell, why is it that the Devil’s Trumpet grows wild all over Utah?

Also, why isn’t there a datura problem that government has to crack down on? Is the Mormon influence so powerful that a few verbal warnings – there was not one sign posted anywhere – are enough to keep an otherwise drug-crazy consumer culture from coming in and going wild? Since when do Americans have that much self-control?
Thinking about this triggers the What’s Wrong With This Picture reflex in my brain. Could it be that something the authorities have been saying about human nature all through the Twentieth Century is wrong? Or maybe the fantastic landscapes of Utah are so amazing that hallucinogenic drugs become somehow irrelevant?