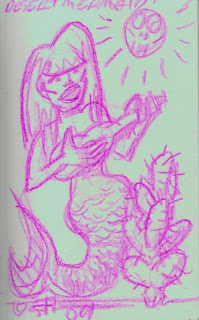 There’s usually a cactus next to her. Sometimes she’s sitting on it -- a bizarre thing for a mermaid to do. She’s most often made from papier mâché, or ceramic, and she's very colorful in the tradition of Mexican folk art. (I have seen one made out of Oaxaca-style black terracotta, and Oaxaca is in the mountains, far from any ocean.)

She’s usually found in tourist shops throughout Mexico, and Aztlán (AKA the American Southwest). She’s beginning to show up in antique stores (and the Web). Desert mermaids are quite marketable.

When did they first appear? On what traditions – if any – are they based?

It may be that mermaids have a tendency to intrude onto land through rivers. There are river mermaid traditions in Africa and South America. In both places they tend to be blonde, like their desert sisters, (though one with Indian features hangs in my hall), and like the Sirens in the Odyssey, they kill and eat humans. And there have been sightings.

In Trail of Feathers, Tahir Shah quotes an Amazonian shaman: "They have blonde hair and teeth made of gold. If they fall in love with you, they lure you to their kingdom under the water."

The South American fear of mermaids extends to river dolphins, who are believed to be able to take human form. Do mermaids walk among us?

They could also be goddess manifestations, like the Virgin of Guadalupe, who also appears out of a cactus. Sirens and sea goddesses become river goddesses as people migrate inland. In the case of the Nigerian Oshun the reverse happened; after her believers where shanghaied to the New World, she became a sea goddess again as Erzulie in Haiti, and Yemanja in Brazil.

Tales of people or spirits who live under water are universal. But how do they end up playing their guitars and ukeleles among the cacti? It must have been more that just a particularly compelling mirage.

Life needs water. Even when we live in the desert, we need to coax it along. Phoenix has canals, built along the network created by the Hohokam, long ago. These canals are haunted by La Lloroña, the Mexican child-killing spirit, and her Phoenix manifestation, Mano Loco.

It’s been recently discovered that Teotihuacán , the Place of the Gods, in Mexico, was built to be flooded; its Avenue of the Dead is meant to be a canal in the desert.

And the Johnny Weismuller movie, Tarzan and the Mermaids ,was partially filmed in Teotihuacán. Yes, Tarzan brought mermaids to the desert. They appeared before the Temple of Quetzalcoatl.

Mermaids have been sighted on Israeli beaches.

Why do I feel safe in predicting that there will someday be mermaids on Mars?

Weird connections. No conclusions. I need to do more research. Hunting mermaids in the desert ain’t a bad way to spend my spare time.
at 2:17 PM