DON’T WANNA BE NO WRITING GURU 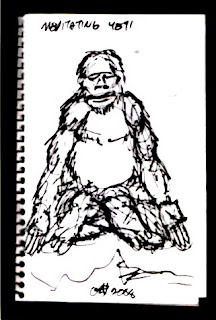 I really don’t want to give advice on how to be a writer. Most of advice that has been passed on over the last few decades was muddle-headed to begin with, and now it’s just plain obsolete, except for maybe the writing section of Paul Riddell’s Greasing the Pan. And the last thing I want to be is somekinda guru – what I’m trying to be is an anti-guru.
Unfortunately, I am a writer in a way that most wannabes can’t imagine. I have a lot experiences in bashing my brains out against the stonewall of the writing life. They may not be very educational, but they may have entertainment value.
What makes some misguided folks think I may be qualified is that I’ve managed to publish enough to earn me a reputation as an International Cult Author. Just ask those people who’ve said nice things about me in Russian, Japanese, Spanish, Portugese, Italian, and Greek. Now, if I just get them to send me some money . . .
It hasn’t made me rich. Then, to be honest, it’s rare for a writer to get rich. If you know of any writers who have achieved a comfortable retirement because of their writing, let me know. Don’t be insulted if I don’t hold my breath.
I have known, and greatly admired, a number of people who have been able to make a living by writing. This is usually done by writing dull, routine stuff – formula fiction, nonfiction that a particular market demands. I wish I could do that, but my perceptions are so twisted that straight reportage comes out like surrealistic constructions, and when I try to hack genre stuff I get called avant garde! This does not get you regular, paying writing gigs.
I used to fret over the fact that I had get a day job, and was denied the life of a true professional, but as the years went by, to my horror, I noticed my friends who made money as writers, were subjected to hard times, health problems (without insurance), and never seemed to get ahead enough to get comfortable. I’d think someone was a prime example of the solid pro writer, then discover that they were practically homeless.
Also, as bizarre as it may seem, what’s always been the easiest things for me to sell is the weirdest, most offbeat stuff. No one has ever told me, "If you could just tone it down a little." It’s more like, "Hey, Ernest, ya got anything really sicko?"
This is because, writing is a crazy business. Don’t be fooled into thinking that this is some kind of civilized activity.
I once heard Kristine Kathryn Rusch mention "scary Zen writing stuff" that she didn’t want to talk about. Actually, it’s more like voodoo, but only if you’re doing it right. I’m willing to talk about it. It’ll be scary, but good for some laughs.
To be continued . . .
at 2:26 PM