GETTING AVANT GARDE IN MY OLD AGE 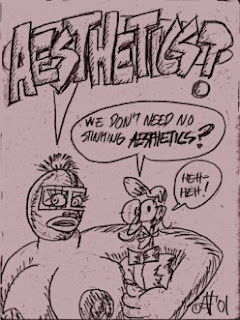 I don’t do well with labels. They tend not to stick to me. The ones that do, tend to be the ones people use when groping to describe things that they don’t understand: science fiction, surrealism, avant garde . . . things people can’t readily define, but know when they see, like pornography.
Avant garde keeps coming back to haunt me. I really don’t know why. Maybe because I know what it’s really supposed to mean, and I know it doesn’t really fit me.
When I was young I actually tried to be avant garde, but gave it up when I realized that it was a good way to insure a lifetime of poverty.
When I finished my first novel, one of the first reactions I got was, "Y’know, this kind of avant garde stream-of-consciousness stuff is hard to get into and really hard to sell." And I was trying to be crass and commercial. I though a cross between Hitchhiker’s Guide to the Galaxy and Fear and Loathing in Las Vegas would be an instant best-seller. Nevertheless, Nwatta-Nwatta-Nwatta remains unpublished except for an excerpt that Kristine Kathryn Rusch ran in Pulphouse.
And the rejection letters! "This could revitalize the genre! Too bad it’s too zany . . ." Maybe I should publish them someday . . .
In another attempt to make my writing habit profitable, it tried to write for Hustler, dreaming about getting paid five thousand dollars for a short story. I studied the market, and came up with a hilarious romp about genital enlargement called, "The Frankenstein Penis." Hustler rejected it.
A few years later, Peter Lamborn Wilson, along with Rudy Rucker and Robert Anton Wilson, did an anthology called Semiotex(e) SF. There, "The Frankenstein Penis" found a home. One critic said it was like "William Burroughs on steroids," and if that doesn’t translate to avant garde, what does?
It became my most famous story. It was reprinted in Penthouse Hot Talk and illustrated with an H.R. Giger painting. Unauthorized translations have popped up in Greece, and Brazil. There was even an award-winning student film. People would run up to me and say, "Oh, so that’s what the guy who wrote ‘The Frankenstein Penis’ looks like!"
I used to joke about writing a sequel called "The Dracula Vagina" if I could find an editor crazy enough to buy it. Enter Chris DeVito, and if you can find the single issue of Proud Flesh, you can read it.
This has given me a reputation for the bizarre, outrageous, outré, and yes, avant garde. This has not been a big plus in an era when people think "commercial" means "dull," and "routine." I’ve had the lecture:
"People don’t like to be disturbed or surprised. They like familiar things and to know what’s going to happen. Life is too full of strangeness these days. Why don’t you do something just like what’s popular . . ."
I usually fall asleep at that point.
But I do wonder, what if forgot all about being entertaining and actually tried to be avant garde? Maybe people’s heads would explode . . .
at 2:52 PM