THE MYSTERIES OF FARMINGTON 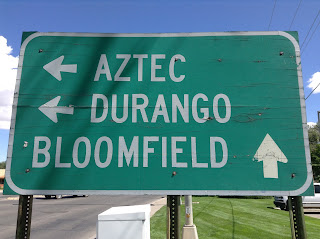 On the way we saw interesting signs: SOCORRO'S RESTAURANT SPANISH FOOD/PIZZA and MAMACITA'S PIZZARIA. Pizza was a big favorite in this part of the country. And what did they mean Spanish food in New Mexico?

Once again we were in Indian territory. The word Navajo, and complicated native names, were on all the signs. As Navajo began to be replaced with Apache, we filled up at the Red Mesa Express Gas Station. It had little TVs on the gas pumps, tuned to the Bloomberg network. I guess the locals like to keep up with the financial news

Under a cloudy sky, even under the cloud shadows, there were mirages on the road.

In a town called Bloomfield there was a tacky little strip mall called Enchantment Square, with a salon called Paradise. 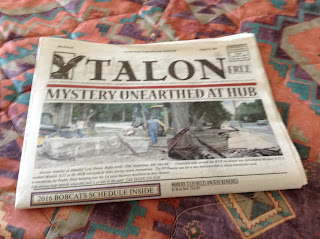 We stayed at the Region Inn, where I picked up a copy of Talon,”Loved my Many, Despised by Some, Read by All,” a free newspaper covering Aztec, Bloomfield, Blanco, Cedar Hill, Farmington, Flora Vista, Ignacio, Kirtland, La Plata, Navajo Dam, Center Point, and SJ County. It had an interesting headline: MYSTERY UNEARTHED AT HUB Ancient remains of Atlantis? Lost Jimmy Hoffa tomb? This mysterious slab was unearthed Monday 8/22 at the HUB courtyard in Aztec during recent renovations. They asked their readers if they could help identify the . . . thing. 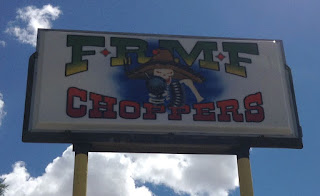 Farmington was a lot more interesting than I expected.

Next to the motel was a place called FRMF Choppers. With an impressive sign and murals. Some people were hanging out in front of the biggest mural. When I asked if we could take pictures, a paternal figure ordered everyone to move out of the way, and they did. They looked more like a family unit than a gang. And they were what they call in New Mexico, Hispanos. 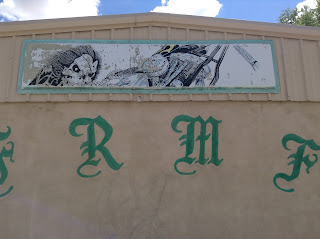 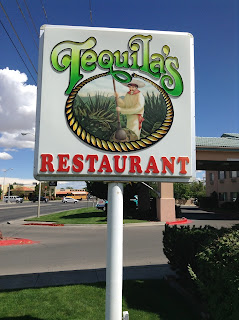 Tequila's, the restaurant attached to the motel, also had a nice sign – though in a different style and sensibility. I took a picture of it before we decided to have dinner there. I wasn't expecting much from a motel eatery, but the food was excellent! And they had two impressive murals and a Frida portrait. 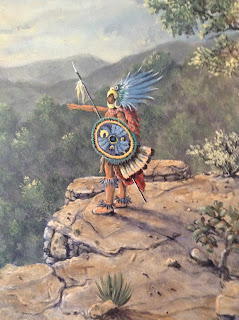 Just when I thought I wouldn't run into any more surprises, in the parking lot, I saw a Mercedes with California plates and a Gary Johnson bumper sticker. 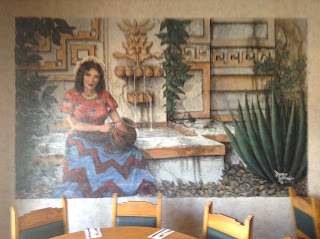 There's more going on in Farmington than I could grasp in our brief stay there. 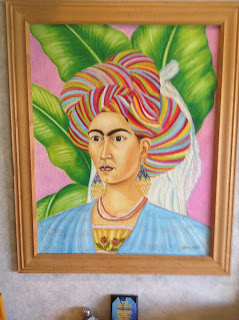