HOMEWARD, AFTER A SPECTACULAR DETOUR 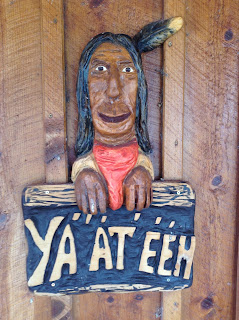 We continued our detour up to Utah. There was a place called Valley of the Gods on the map that sounded interesting.

Meanwhile, we cruised through the Navajo Rez. There is a McDonalds in Shiprock – actually there are McDonalds in most of these Indian towns, announced by large, well-maintained billboards. We passed another Burritos y Más, could it be El Uno? Could one be coming soon to your town? And what about the store with the mythic name of Monsterslayer?

I made a joke about how in Trump's America they'll have to hire illegal aliens to do all the deporting, and they'll take turns arresting each other. Em ordered me to write the story. The problem is by the time I finish it, the election will be over, and the gag will either be irrelevant or illegal. 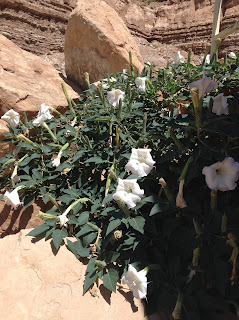 There are a lot of Navajo murals around Shiprock. A good subject for a photo essay or a documentary. America is creating new cultures and doesn't even know it. Then we passed the headquarters of Navajo Nation Shopping Centers Incorporated. Once we got into Utah, but still on the Rez, a sign said, VOTE FOR FAY BLUE EYES.


And there was datura blooming everywhere.


Unfortunately, the Valley of the Gods was unpaved, too primitive for our vehicle, but the stuff near it was fantastic! Gooseneck State park was amazing! 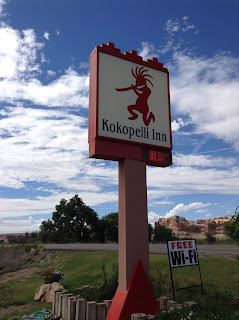 We stood at the Kokopelli Inn in Bluff, Utah, established in 650 A.D.(the town, not the motel). The password for wi-fi was in Navajo. 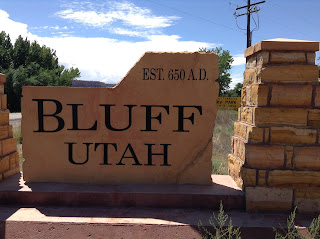 The next morning was cool and cloudy. Native American flute meditation music accompanied the free continental breakfast. The motel was linear and symmetrical, so I got lost. It was time to head for home.


As we left Bluff, Highway 163 was lined with datura. 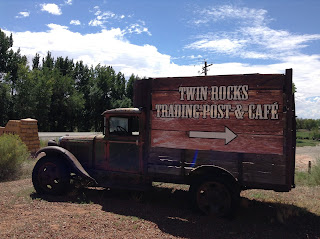 The 7-Eleven at the Mexican Hat gas station sold coonskin caps. I decided not to get one. It never gets cold enough for them in Phoenix.


Then we went down through Monument Valley, that Hollywood uses as a stand-in for both Texas and Mars, back to Arizona, through the Rez, and Hopi, where a lone llama was surrounded by cows, and just before Tuba City was a hand-painted sign for dinosaur tracks. What? A Hogan Family Restaurant? Then the Painted Desert, where someone named Jamesita was running for office.


Eventually, it got familiar. Still weird, but familiar. 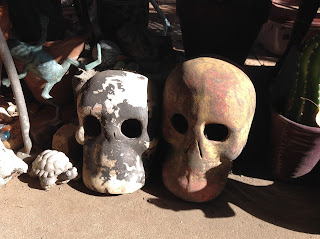