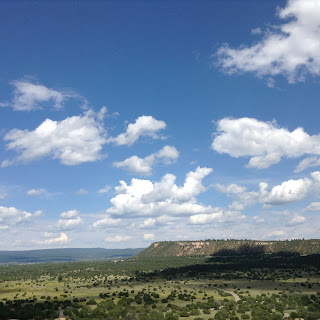 The sign in front of the Zuni pueblo said, NO PHOTOGRAPHY OF RELIGIOUS OF CUTURAL ACTIVITES. I put my iTouch away out of respect as we we drove through. The sky was full of fat, fluffy, flat-bottomed clouds. Then it started raining. Suddenly, it hailed. It cleared up as we left the pueblo. 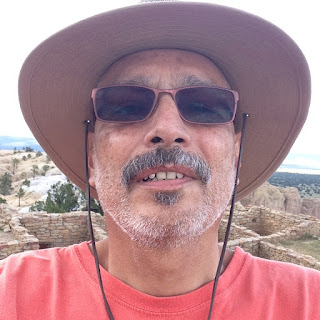 Clouds swirled all over the sky as we hit the El Morro National Monument. They got thicker as we climbed up to the ruins of the Atsinna pueblo. A raven warned us that we could be struck my lightning. There was thunder. And lightning in the distance, getting closer. We took the raven's advice, and left. 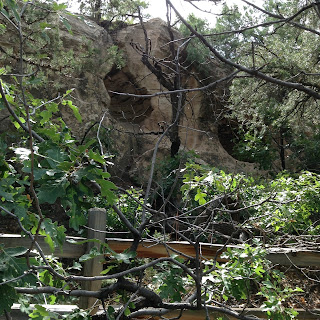 We saw ravens all over on this trip, big ones, strutting around like they owned the place. Don't know if any were brujos in disguise. 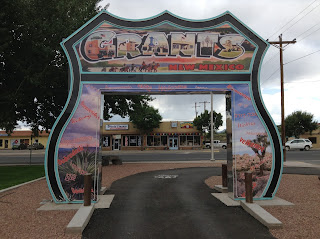 We passed the El Morro Ranches Subdivision, and a USE EXTREME CAUTION sign on the way to Grants, “The City of the Spirit,” where we checked into the Super 8, and had another dinner at El Cafecito. The spices on the tacos were subtle at first letting you taste the meat, then they got the inner ears tingling, and the nose running, and made a proper mess. 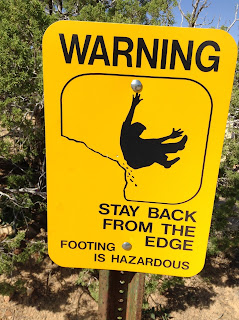 Back at the motel, TV news of the apocalyptic: a killer earthquake in Italy, tornados in the Midwest, Trump accusing Hillary of being a bigot, and then there's something called the Alt-Right . . . Whither goest thou, America? 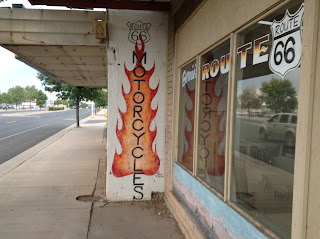 Something to ponder in Grants, New Mexico, an old uranium mining town that after the Cold War became a place to stay to see wonders like El Morro and El Malpais. It's Postapocalyptic and Postmodern, but doesn't realize it, which give it a unique 21st century American charm. 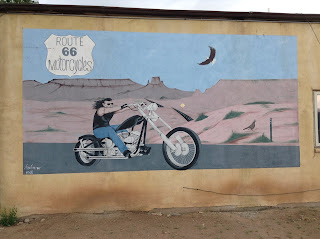 How did that large white rabbit (definitely not a native cottontail) become roadkill? Could it be an escapee from a local mad scientist's lab? I wondered as we passed a store with strange metal chairs with lots of electronics attached – like props from a vintage sci-fi flick. 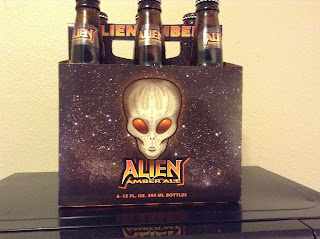 In a drug store I found Alien Amber Ale, and bought a six-pack. It seemed fitting. 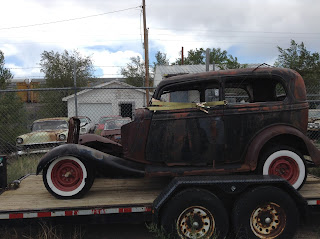 After cruising the magnificent desolation of the lava-fields of El Malpais, Em and I explored Grants' Main Street/Santa Fe Avenue/Route 66, with its murals, quaint motorcycle shops, bars, eateries, motels, and strange vehicles. Some are still in business, others dead and abandoned, and often it's hard to tell which is which. Not a ghost town. Maybe a zombie town, but if you say so, it comes to life and objects. 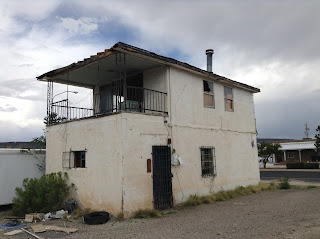 We had dinner at El Ranchero Cafe, in Milan, a little further down Route 66. The walls were decorated with a picture of Zapata in his skinny jeans, and a Villa Wanted poster that offered a $5000 reward for the general. The food was “Mexican Mexican” enough for my mother-in-law, though a poster advertised TACOBURGERS FRIES & COKE X-HOT for $7.99. The tacoburgers looked like Navajo tacos, or Indian tacos as they call them in New Mexico.