After The Transhumanist Wager, and The Turner Diaries I continued my reading to get ready for election year madness with Abbie Hoffman's Steal This Book. I didn't have to steal it, you can get if for free online, or download a free pdf. It's almost as good as stealing.

This is an oldie, from way back in the Nineteen Hundreds. I was in high school when it came out. The world was downright dystopian back then, America required all males over eighteen to sign up for a lottery, and if you were selected, you got sent over to fight in a real war.

Abbie Hoffman was part of a group called the Yippies that were protesting the war and struggling for other things that kids take for granted these days. He wrote Steal This Book in prison.

It's not science fiction, but could easily fit in on a shelf of New Wave sf (that's the way we wrote it back then, standing for either science fiction or speculative fiction, in lower case so people know you don't mean San Francisco). No plot. A lot of lists. This instruction manual for a do-it-yourself utopia kit, that takes the leap from nonfiction into spec fic in that it's about setting up an alternative reality, a new Nation. He had earlier tried to brand Woodstock Nation, but apparently some corporate entities had the rights to Woodstock . . .

Oh, that's right, these days corporations are people, too.

Hoffman and the Yippies were an experiment in living your science fiction instead of writing it. Or as artist Ron Cobb said, “Science fiction has always been a verb to me.”

In fiction, such things are the work of mad scientists, and it's dangerous. Look at what happens to the mad scientists in all those stories and movies. It's not surprising that Hoffman ended up in prision.

As the title indicated, the book is all about the virtues of stealing, and even suggest that it should be stolen. Big time publishing was repulsed. It had to be self-published.

And: “To steal from a brother or sister is evil. To not steal from the institutions that are the pillars of the Pig Empire is equally immoral.” 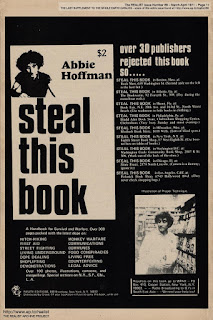 I never tried to live this way. My parents taught me that thievery was low. And because of my skin color I was harrassed from an early age by security agents in the comsumer zones.

From the book: “The first duity of a revolutionary is to get away with it.”

Some members of my generation tried to live according this book's advice. This usually lasted until they had an encounter with law enforcement. Also, running around, pulling scams takes a lot of time and energy; getting a straight job can actually be easier.

When I worked for Borders I found myself going mano a mano with later day Yipsters who didn't remember Hoffman's advice about respecting employees, and committed an error that isn't mentioned in the book: Don't get greedy. You can do a quick, subtle grab or run a customer service scam and get away with it now and then, but if you come back and try it every week, somebody's going to figure it out and shut you down. Of course, this makes it hard to pay your bills.

Borders hired a couple who were trying this lifestyle, and I worked with them. The male had blond dredlocks and mostly walked around with a beatific expression, waiting for someone to tell him he looked like Jesus. The female went on about how she was raised on dumpster diving, and was regurgitating Steal This Book-isms. They were attempting to work long enough to become eligible for unemployment. A nice scam, but you shouldn't go around telling your co-workers – and your boss . . .

They were fired, called us all fascists, and said that they were running off to Nicaragua because Bush was building concentration camps where he was going to put anybody who was against the war.

I wonder where they are now?

Technological advancements, and the arms race between the rip-off and the sellers, have made a lot of the book obsolete. I now read about print media, pay phones and coin-operated machines, and feel nostalgic. It would be an excellent reference for writing about the period.

What makes it still worth reading is the manic energy devoted to a utopian vision – we don't see much of that anymore.

Of course, the whole Steal This Book/Free Nation is totally dependent on an out-of-control, wasteful, planet-raping consumer society spewing out goods and services all over the polluted, overpopulated landscape. The Anti-Establishment needs the Establishment in order to exist. It's the yin/yang merry-go-round of doom.

It's also full of a lot of crazy (and some not-so-crazy) ideas, another alternate reality for sale – or maybe you should steal it – in the 21st century poitical marketplace. Want something other than what Hillary Clinton and Donald Trump are selling? Do you know what you want? Or have you just been conditioned that way?

Or as Hoffman said: “If you don't like the news, why not go out and make your own!” 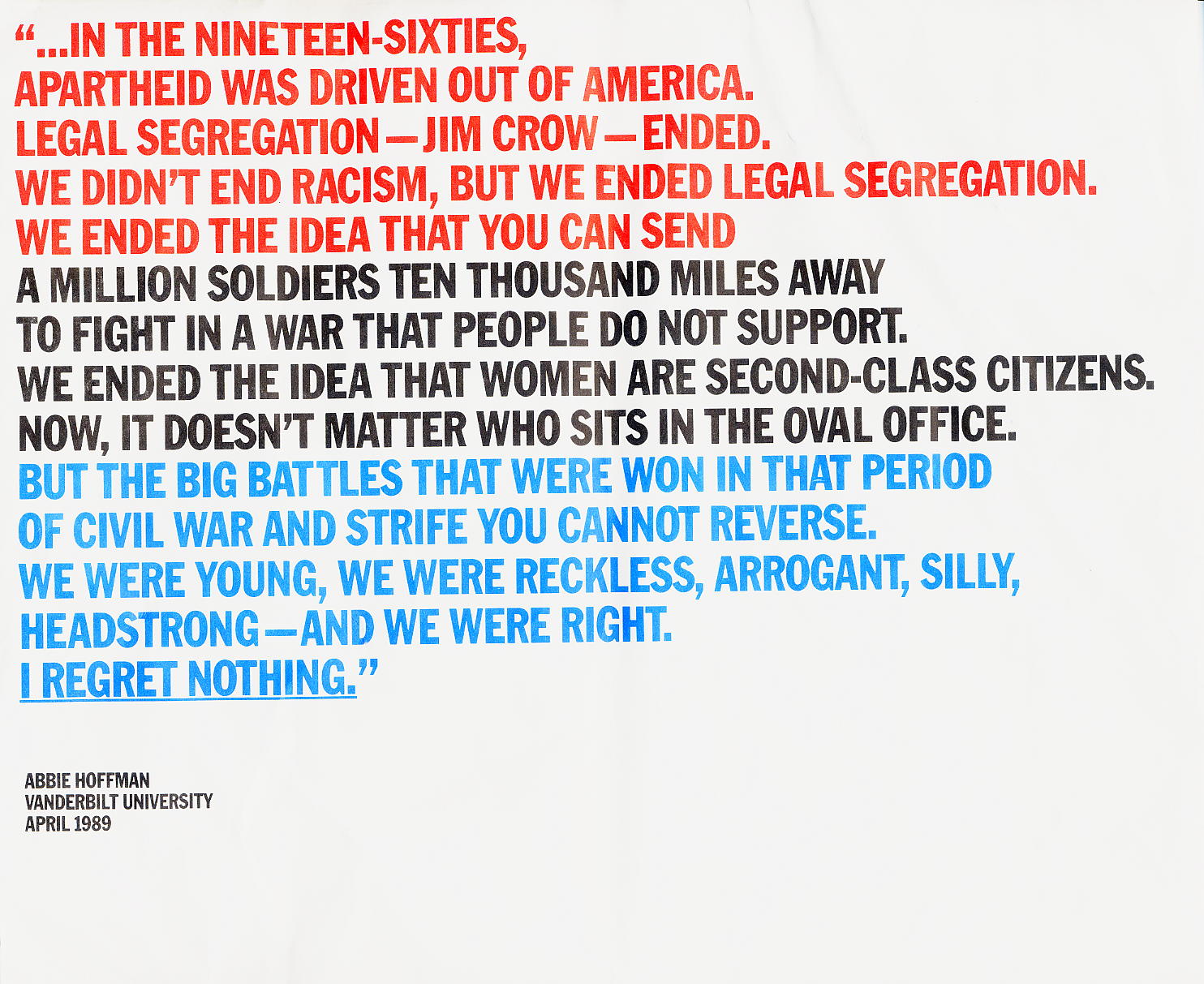