LUST FOR A WHITE PLANET 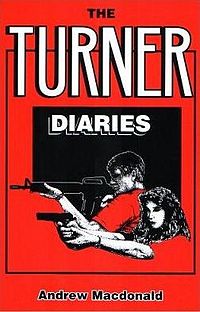 I was reading a crazy book, when the craziness started spilling over into the real world:

Donald Trump annouced that he's running for president, and mentioned Mexicans: “They're rapists. And some, I assume, are good people.”

A young man named Dylann Roof told a group of black people in the Emanuel African Methodist Episcopal Church in Charleston, South Carolina, most of whom were women, “You're raping our women and taking over the country,” and killed them.

On Facebook, Ishmael Reed said the The Turner Diaries were “Required reading. If you want to know what motivated this church killer read this book.”

The crazy book? The Turner Diaries, the infamous novel written by Nazi William Luther Pierce, under the pseudonym Andrew MacDonald. It inspired Timothey McVeigh to blow up the Alfred P. Murrah Federal Building in Oklahoma City.

I had wanted to read it ever since I read Ishmael Reed's essay about it, in his book Another Day at the Front, and  The Turner Diaries can be downloaded for free on Internet Archive.

I'm happy to report that it doesn't work as a manual for guerrilla warfare. Developments in communications, surveillence, and military technology have made the practical advice in the book obsolete. Whew.

The Turner Diaries is not a literary masterpiece. It's not even good fiction. Pierce tells more than he shows, avoiding drama for monologue. There isn't much dialogue. The one attempt to show “the negro dialect” is pathetic. And all the characters are one-dimensional. 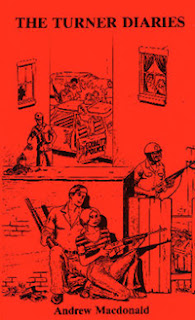 The narrator/hero Earl Turner has no past, no family, no motivation. The mere existence of Jews, Blacks, and other non-Whites is presented as enough for his rage. As for plot, entire chapters could be cut without taking away from the “story.” This is partially due to the details that are gone into about making an ammonium-nitirate bomb (the book begins with all guns being confiscated by Black agents of the government after they are banned by the Cohen Act) and counterfeiting that is done to destroy the American economy (because apparently the efforts of the Jews and non-Whites to do so isn't working fast enough). There's also a Mansonesque/hippie counterculture that sells White girls to Jewish-run white slave rackets.

Dispite the racist agenda – Blacks are shown as criminals/rapists/cannibals, and are killed like vermin – “racism” is often put in quotes, a "lie" that the liberal media is spreading. And though at first the word “patriot” is used, later the U.S. Constitution is sneered at, and conservatives are mocked as weak. Hitler is mourned and defended.

Refusing to recognise the humanity in others is the core of The Turner Diaries. It's the most single-minded book I've ever read. There are no real characters. No one is human. Mass slaughter is reasonable, if it helps make Earth into the Planet of the White People.

So, what's the appeal? It's feel-good reading for racists.

And it is ridiculous. Like the White teenagers who happily take the place of Mexican migrant workers. (Would Dylann Roof take the job?)  Like the very idea of an all-white planet.

Yet, we hear such ideas being taken seriously.

This book should not be banned, but brought out into the light. Let everyone see how absurd it is.

Chester Himes said, “Realism and absurdity are so similar in the lives of American blacks one cannot tell the difference.”

But if we don't try, we all become absurd, and the Dylann Roofs of the world win. 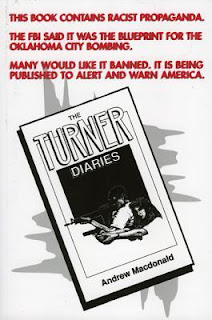