Obeah X15 and Doc Burnout popped open the doors and ran for the main entrance of Christown.  I struggled in pain in slow motion, pulled the keys out of the ignition, got out and locked the doors, and followed.

The moon was full.  According to local folklore science fiction writers were hanging out in the corner JB's while other strange creatures homed in on the mall like iron filings to a magnet. If you listened carefully you might hear naked Wiccans practicing a ritual in nearby swimming pool.

I nearly bumped into a Mayan guy who was contemplating a spilled Slurpee between his sandaled feet. He looked at me from under his straw cowboy hat, gave a beatific grin and said, "Hasta luego," which means 'until we meet again.' He must have been another urban dreamwalker. I wished him "Buenos suerte."

The mall was packed. Anglos of every breed, Chicanos, Navajos, African Americanos, suntanned Asians, Mayans, Aztecs, Hindus, and assorted recombinations, were merrily milling about. Overweight security guards oversaw it all like walking Buddhas. Nobody noticed my stubbled and scarred head. Like Obie often said, "Christown is a happy medium among malls; people with walkie-talkies don't harass the people of color, and you don't get gangsters signing at you."

But I still couldn't find Obie and Doc. Had they ditched me? Then, the chip noticed a bookstore where a bespectacled black clerk was trying to close up and sent me lurching toward it.

Suddenly, someone grabbed my arm. It was Obie.

I stammered and held out the keys.

"Oh, thank goodness," Doc said as he grabbed them. "Did you lock?"

I shook my head.

They pushed me to a table at Miracle Mile where three iced-teas were waiting for us.
"No walking saguaros. No big lizards. No giant cockroaches. I guess it's safe to talk here."

Maybe. There was a Nigerian at the next table looking straight at us typing into a laptop as some Fela Anikulapo-Kuti leaked out of his Walkman. He seemed to be taking notes on our conversation.

NEXT WEEK WEEK: COCKROACHES AND BREAST-IMPLANTS 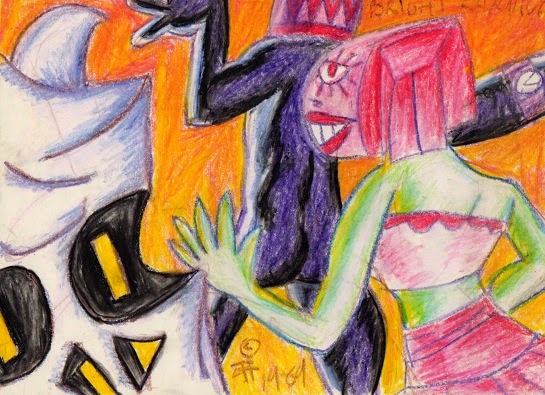