GETTING INTO SAN FERMÍN 2012 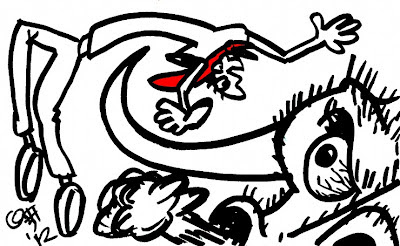 I will probably never run with the bulls in Pamplona. I'm too old, and my knees and ankles tend to give out when I run. I'm more of hiker, “a mountain goat” as my wife puts it.

This being the 21st century, I'm a virtual bull runner. The Information Age has made bullfighting a global activity, and the FIesta de San Fermín hasn't had such a boost since the publication of Hemingway's The Sun Also Rises. I can go online and wallow in interweb coverage.

And I have in years past. Here are links to my San Fermín blogging:

Bullfighting: the Mother of All Artforms


The Mysteries of Saint Fermin


Wild in the Streets with Traditons and Mutations


Running with the Bulls in Cyberspace


The Naked and the Pseudo-Naked on the Road to Pamplona


San Fermin: Bulls and Beyond

I'll be writing more on the subject, too, but this year is going to be different: I'm doing research for my bullfighting novel. There's going to be a San Fermín sequence – maybe more than one.

Just as Las Vegas has developed far beyond Hunter S. Thompson's wildest hallucinations, San Fermín has now made what Hemingway shocked the world with look like a quiet tea party. Straight reportage of it comes off like far-out dystopian satire.

If you don't believe it, check out SanFermin.com, for multimedia coverage of not just the runs, but all the other craziness – for those of you who prefer to “watch the real beasts perform,” as Thompson said about the Kentucky Derby.

Those of you who prefer more artistic and reverent coverage can go to SanFerminEncerrio.com.

And the bullfights can be seen on Ferias Taurinas Online.

It'll be weird. I will be inspired.