WHEN THE SON OF HERCULES WAS BLACK 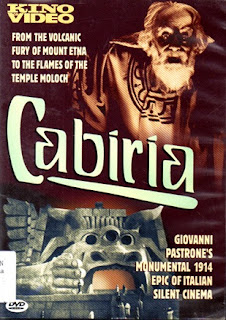 I was on the lookout for the 1914 silent film Cabiria. It influenced Fellini – he named the heroine of his Nights of Cabiria after the title character. It was the beginning of the peplum, or sword & sandal, genre. It's also the first appearance of the muscular hero Maciste – whose origins seemed to be shrouded in mystery.

It lives up to its reputation. It's an action-packed adventure set during the Punic Wars in the Third Century. It starts with Etna erupting – most movies since have saved their volcanoes for the end. There's also Archimedes as a prototype mad scientist incinerating Roman ships with his solar-powered death ray. And of course Cabiria, still a little girl at this point, is taken to Carthage, where cultists try to sacrifice her to Moloch.

This incredible scene influenced Fritz Lang later in Metropolis, and may have even been in Allen Ginsberg's mind when he wrote his Beat Generation anthem, Howl.

Of course it is Maciste, played by Bartolomeo Pagano, who snatches Cabiria just before she can be inserted into the diabolical, flaming Moloch machine, stealing the show.

And once he showed up, the mysteries about his origins fell away.

His skin is dark. Very dark. It's makeup. I'd use the term “blackface,” but its all over his body, on every exposed muscle. He wears a leopard skin. He is the African slave of Fulvio “Fulvius” Axilla, a Roman gentleman hero who, in the Victorian tradition, has a loyal, hulking manservant to do the heavy lifting.

All the other slaves in the movie have the same paint job. It is said the D.W. Griffith was also influenced by Cabiria.

In the end – which takes place ten years after the beginning – it is Fulvius who Cabiria marries, while Maciste stands back and grins.

Maciste turned out of to be marketable. Bartolomeo Pagano played him in twenty-five films. IMDb says that he played the character in blackface in all of these, but he looks pretty white in Maciste in Hell, and in photos I've found online. Somehow, the movie's first black superhero turned white when he became popular.

This does add to Maciste's mystery. His adventures unfold in any place and time that the flimmakers see fit. He just shows up, like Bugs Bunny or Daffy Duck, without a visible time machine. Could it be that besides superhuman strength and time travel, he can change race at will?

Later, in the Sixties, more Maciste movies were made. He was played by a number of well-developed white men.

But when they dubbed them into English, there seemed to be a problem with the name, Maciste. It must have sounded too “foreign” for the Anglo audience. It does kind of sound African, doesn't it? So he was Maciste only in a few, given other names for some, sometime he was even called Hercules. Or the son of Hercules.

They were even packaged as a Sons of Hercules series.

But I do wonder, if remake-crazy Hollywood decided to make a new version of Cabiria, what color would Maciste be?