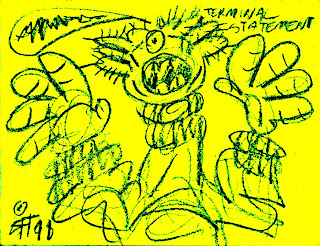 Once again, Rudy Rucker has allowed me to get away with an outrageous act of sci-fi. Over at Flurb, you can now read “Xuanito” a Godzillaesque romp in which a young Chicano takes on the world.

That seems to be a recurring theme with me . . . I wonder why?

This story has history. I originally wrote it after being depressed for a few years after the corporate sci-fi industry declared that I had no commercial potential and decided they weren't going to touch me with a ten-foot pole. For a while, turning on the computer to write would make me burst into tears.

But the sinister urge was still there. So I decided, screw it, forget about salability, or even what form it should take. Just write. Make it good diabolical fun. After all, like Henry Miller said in Tropic of Cancer, “Everything that was literature has fallen from me.” This was a good ol' “gob of spit in the face of Art.”

It took time to sell. I had some near misses. It's amazing how often a magazine can go out of business before they publish your story. I think I was even paid for it more than once . . .

Of course, then I called it “Your Future in Hallucinogenetics.”

When I sent it to Rudy, he wrote back with some suggestions. They were good. Rudy gets what I'm doing, while a lot science fiction professionals these days don't. He also wanted to make the story wilder. I can't resist when someone asks me to crank it up rather than tone it down.

The result is a better story. Xuanito became a dominant character, so I gave him top billing like Frankenstein, Dracula, and Godzilla.

Thank you, Rudy, for making it possible for me to unleash this glorious monster into the world.