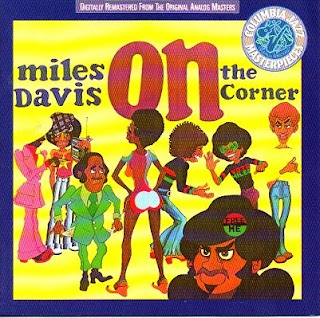 Going over a file of a scanned book, correcting all the glitches generated by the fact that an OCR program doesn't understand human language, is tedious work. It's something a lot of us writers are doing in these days of the Ebook Revolution. Not as exciting as rioting in the streets, but necessary, and the results will be more world changing than mere mob violence.

As I go over Cortez on Jupiter until my blood-shot eyes cross, I've been playing Miles Davis' On the Corner. It fits so well, I'm beginning to think of it as the novel's unofficial soundtrack.

That clankity, wailing funk always sounded sci-fi/futuristic to me. Feels like moving through crowded megalopoltian streets teeming with people and machines up to all kinds of business and/or pleasure like the blaxsploitation/underground comix characters in Corky McCoy's cover art. Are those spaceships overhead? Sure we got illegal aliens, and not just from this planet, amigo!

There's also something cybernetic about that sound. The 1972 technology probably didn't have many computers in the mix, but you can hear the hints toward sampling and digital editing. It is the street finding it's own use for technology, but to a beat that William Gibson never imagined. It's the shape of funk to come, pointing the way to rap, hip-hop, techno, the Afro-pop of King Sunny Ade and Fela Anikulapo Kuit.

It doesn't as much make you want to dance as make you want to move through complicated environments to its rhythms. Oh, to be cruising recombocultural streets in customized-to-the- Frankensteinization-point vehicle that can roll and fly, with On the Corner leaking through the windows, and vibrating through the frame . . . and your bones . . . your DNA . . .

Pablo Cortez and his world, and him slinging paint around it, come alive in this music. And it keep me focused as I go over the words, zapping those glitches, making it all come through loud and clear. 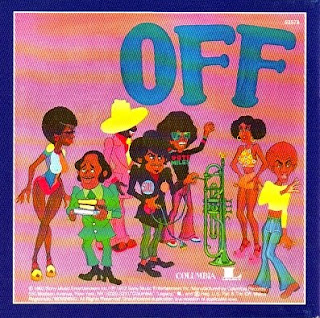