TO VENUS AND MARS VIA TONTO NATURAL BRIDGE

Xihutecuhtil, the Lord of Time, smiled at Em and me again. He allowed our days off to mesh. We could take off for another day trip, get away from the Phoenix heat island, recharge the batteries, adjust the compasses.

First we had matadors – a delicious spicy latte – at Lola's in Central Phoenix. Saw some impressive murals there, where naked, crumbling walls cry out for them.

As we got away from town, the roadkill got strange – a mutilated, hairless animal . . . chupacabra? 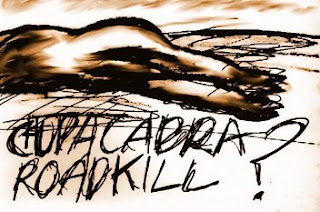 In front of the short, sweet Waterfall Trail, a sign warned: “This area contains numerous natural hazards. Enjoy it with caution.”

At Tonto Natural Bridge – fossil water seeps through the rocks, comes down in constant rain under the bridge. Passing through it puts you in touch with what's really going on on this planet, this universe.

I though about the term “sacred waterfalls.” But aren't all waterfalls sacred? 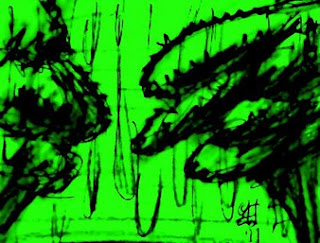 Just beyond the bridge was thick, green moss, hanging vegetation, and more water falling and twisting through the wind -- in August in Arizona. We found a place where you could take photo illustrations for Ray Bradbury's classic story about Venus, “The Long Rain.”

Yeah, I know, it doesn't rain on Venus. But maybe some day it will. At least there really is Venusian lightning. 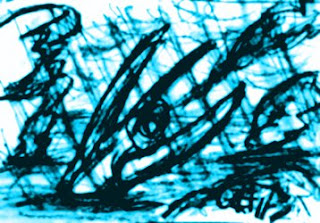 Then we explored this forest where cactus grows out of porous rocks left over from ancient oceans – not far from the deserts that inspired Edgar Rice Burroughs' dead sea bottoms of Mars.

In Payson we stopped to eat at La Sierra Mexican Restaurant (though the hand-painted sign says “Restaurat” in letters that look like logs) Great décor with painted bas relief chairs and tables from Guadalajara, Univision HD on a flatscreen, psychedelic sombreros on the walls. And the food was great, too.

We passed through another storm on the way back, ready to face August in Phoenix.