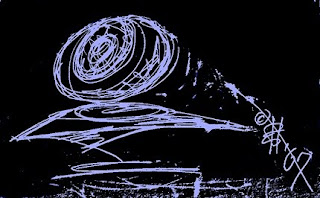 You can read it at DayBreak Magazine. It’s another adventure of Victor Theremin. Like “Human Sacrifice for Fun and Profit” I practically pulled it out of thin air.

This was another story that grew out an e-mail request from an editor. This time from Jetse de Vries. He asked for an optimistic near-future story for his anthology Shine.

I didn’t know what do, but got to work. Even though I’m a skeptic and a trickster, I essentially an optimist. I had to do something.

Once again I gathered some weird stuff from my brain: The idea of an science fiction writer from the old days being suicidal over how the twenty-first century turned out, some visions of Moab, Utah, and then there was Victor Theremin and his universe. It cooked an popped in record time.

It wasn’t quite a slam-dunk: Jetse didn’t accept it for Shine (which is out, and I highly recommend -- I’m reading it slowly -- it’s making me think, and rethink -- watch for some postings here soon), but wanted it for DayBreak. Which is okay, I think that Victor Theremin works better in an online medium.

And suddenly, the writer biz is buzzing again, going electronic, giving me all kinds of things to do. Victor, is that you? I seem to have stumbled into a new kind of voodoo when I crossed this frontier.