VICTOR THEREMIN AND/OR ME 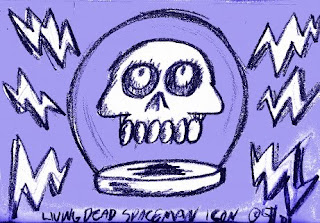 Victor Theremin is a fictional character I created. I’m pretty sure I created him. Pretty sure. I think.

It started with an e-mail from someone doing an anthology. That’s the way I usually sell things these days -- I have a reputation. In this case it was James Palmer. His anthology was Voices for the Cure, it was to be released via Lulu at DragonCon, and all proceeds would go to the American Diabetes Association.

There would be no pay, but pay for short fiction is hard to come by these days. Besides, it was for charity, and was a chance for me to check how print-on-demand worked without shelling out any money of my own. All I had to do was come up with a story.

The problem was I didn’t have one. And the deadline was in few weeks.

Luckily, I’m me. The way I’ve lived for the last five decades, I’m in the habit of accumulating all kinds of weird stuff in my brain. I could say that’s from my extensive training to be a professional writer and artist, but it’s the just the way I amuse myself. And it does come in handy.

If I need a story, I grab some of this weird stuff, stitch it together, and hopefully (when zapped with enough energy), the monster comes to life. Then all I have to do is take notes on the havoc it wreaks upon the landscape.

I didn’t have much. There was a phrase, “Human sacrifice for fun and profit,” that I thought would make a good title. I also thought that Victor Theremin, the first commercially produced electronic musical instrument, would make a good character name. And I had just read Rudy Rucker’s collection Mad Professor, which had me thinking about the state of the art of science fiction and the Singularity issue.

And it worked. After coming up with an opening line, I started writing without any real idea of where it would go. The monsters from my id came out to play. In a few days I had a story.

As I’ve often told Em, “Short stories are like a bout of the flu -- novels are like demonic possession.”

I felt good, like I had pulled off what I had heard Ray Bradbury and Harlan Ellison brag about decades ago.

James liked the story and put it in the anthology. You can still buy it and read it.

The bizarre thing is, Victor Theremin had taken on a life of his own. I first envisioned him as being like Kilgore Trout, but he’s turned out to be more like Raoul Duke, saying dangerous things that should be said, but that are too out there to really be anybody’s opinion.

I’ve written more about him. I can’t seem to help it. I even sold another story about him.

I’m not sure who’s in control here. Maybe, in an alternate universe, Victor Theremin is writing about Ernest Hogan.