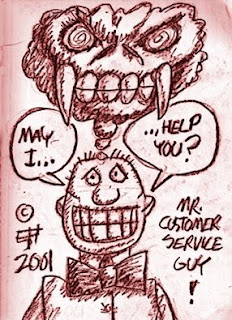 Funny how time changes your perspective. When I was a kid, the Genie in the Sabu version of Thief of Bagdad scared the crap out of me. Rex Ingram (the African American actor, not to be confused with the Irish Rex Ingram who directed movies and wrote the incredible bullfighting novel Mars in the House of Death) just blew me away with his booming voice and diabolical attitude. Over the years I grew to like him more, until, these days, I admire and identify with him.
In more viewings of the film than I can count, I realize that the Genie is the most interesting and most important character. He had an agenda. He didn't just want to be freed from the bottle and his slavery, he wanted cosmic revenge. He manipulated Abu/Sabu into stealing the All-Seeing Eye of the mysterious unnamed goddess, blinding her to the doings of humanity for ten thousand years. When it is done, he is delighted.
I've often wondered, did that crime damn or free us? After the ten thousand years are up, will the goddess like what she sees with her new eye? When he yelled "Farewell, Little Master of the Univoise!" where did the Genie go and what did he do?
And why do I feel like him?
For the last decade, I've spent most of my time in Big Box, being Mr. Customer Service. It wasn't bad. I earned an honest living, and learned some hard realities about being an artist and writer in our global civilization. Now that it's over, fate has allowed me to pursue my own interests and my own agendas.
You shouldn't spend your entire life serving the Little Masters of the Universe. You should break out and do your own thing if you can. Do your damnedest to gore the matador. It's what aesthetics, spirituality, and life are all about.
I hope to achieve that Genie's attitude. If I'm lucky, I'll be able to laugh like Rex Ingram.
at 12:42 PM