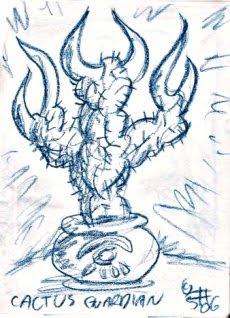 Theme & Variations a podcast anthology of science fiction with musical themes edited by Michelle Welch became available during my recent computer outage. It features my story “The Rise and Fall of Paco Cohen and the Mariachis of Mars.”
It first appeared the April 2001 issue of Analog -- about a guy working as a janitor on a Mars colony. The corporation in charge tries to use him to manipulate the workers. Paco has his own ideas, and so does the nanohudu that’s doing the terraforming on the molecular level.
This wacky idea started back when Em & I got involved with some people who were experimenting with making videos. This junkie showed up who claimed to have contacts in Hollywood, and soon had us wasting a lot of time coming up ideas for movies. We met a guy who knew a lot of cowboy/stunt men who needed work. I had a blurry vision of a sort of spaghetti Western passing off Arizona as Mars with a lot of low-budget Road Warrior-type stuff.
The so-called production company crashed and burned. I sold my first two novels. Em & I went for lots of walks in the mountain preserve behind her Mom’s house. My brain entertained itself by making the landscape into something Martian.
Then I couldn’t sell my third novel – hell, Nueva York and me never got along – I got depressed, started listening to everybody about how to write the sort of thing that they will buy. I took the Mars stuff that was cooking in brain, and instead of the simple, Flash Gordon-ish adventure I first envisioned, I tried to make it into the grand epic that everybody assured me was the only kind of science fiction that would sell.
The problem was, I hated it. I struggled with world building, drew pictures of NeoMartian creatures, did some sample chapters and an outline, but that monster never got up off the slab. And Nueva York rejected it. 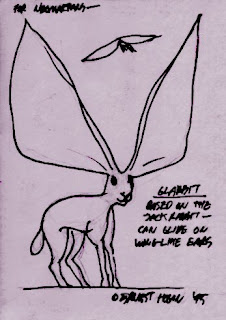 I shelved the mess, Em & I got by cleaning houses and sweeping classrooms. We did illegal alien work and listened to ranchera radio, saw how music disconnected from the corporate infrastructure affects people’s lives.
One day, while washing windows in Sun City, I felt a biting pain. I had backed up into a cactus. When Em pulled the spines out of my butt, I was amazed at how big they were. They looked like long fangs. The NeoMartian world in my brain stirred. The vampire cactus was born.
Yes, sometime inspiration literally bites you in the ass.
Over the next few years, as I sucked up dust, bits and pieces of my aborted novel rearranged themselves without much help from my conscious mind. I felt like a mariachi, doing the dayjob, making my “music” when I could. Paco Cohen came to life out of the ashes of that aborted novel. And the NeoMartian world keeps eating away at me. I’m working on a sequel. And the original, straight-up, adventure story keeps after me. 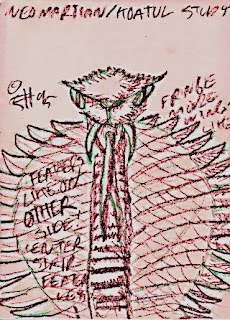