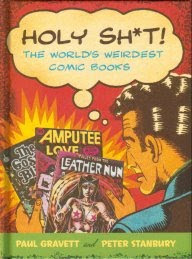 One of the great tragedies of our age is that our superheroes are owned by TimeWarner and, now, Disney. Representatives of DC and Marvel sound like stock brokers talking about maintaining their branding. Fanboys say things like, "I expect superheroes to be about ISSUES!" And great cultural landmarks like the Iron Man and Dark Knight movies are like professional wrestling -- guys in silly outfits beating on each other, and it's all fixed. Only with these movies, and "graphic novels" (a pretentious term I hate) we’re forbidden to laugh. It’s supposed to be Fine Art even if it does reek of a cynical corporation propping up creaky old franchises.
Which brings me to Paul Gravett and Peter Stanbury’s Holy Sh*t! The World’s Weirdest Comic Books. See? Comic books, not graphic novels. No corporate sponsorship. No slick production. Just pure, raging weirdness, and cheap thrills that may get you expelled. The authorities will tear such cultural atrocities to shreds in front of your eyes, just to teach you a lesson. And who know’s what today’s Orwellian child-rearing authorities would advise.
Though there a some covers and descriptions of comics from recent decades, in Holy Sh*t!, most are from before Marvel and DC became "cool." I remember a lot of them. The bulk are from companies that no longer exist -- some of them only existed for brief flash of weirdness. Some were cynical attempts of make a quick buck, while others were attempts to make the world a better place.
Oddly, the high-minded books tend to be the strangest. The Leather Nun is nowhere as weird as Hansi: The Girl Who Loves The Swastika, The Gospel Blimp, or Neraka, a Malaysian Islamic vision of Hell. In a bizarre way, the creators of Amputee Love, had intentions similar to those of the religious giveaways.
Others tend to be examples of what happens when twisted talents are given a forum to go wild. Jerome Segal’s Jon Juan, Steve Ditko’s The Geek and Mr. A, Otto Binder’s Fatman, the Human Flying Saucer, and the cult-favorite Herbie all probably horrified the folks that were signing the checks.
Interestingly enough, a lot of these were commercially successful, but got the plug pulled on them for sociopolitical reasons. Loss of nerve can override the profit motive. These are the limits of capitalism.
Too bad. Our civilization is weaker for it.
Holy Sh*t! takes me back to some of the happiest times of my childhood, spinning a comic book rack. All the covers were gaudy portals into strange worlds, not some cohesive corporate universe. Every now and then, I would discover something that was so peculiar that I just had to buy it. It didn’t matter if they only lasted a few issues, they opened up a kind of weirdness in my mind that made me what I am today.
I hope that with the emerging technology, and cultural turmoil, artforms will arise that will give future generations the opportunity to be similarly warped.
at 1:06 PM