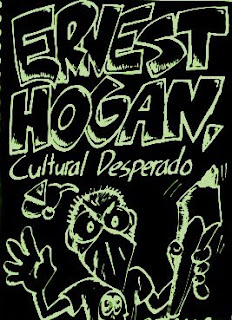 He’s been dead over a year, why not?

Evoking George Carlin always takes me back the early Seventies. The Sixties had come to a hemorrhaging climax that reached all the way to the Moon. Vietnam was still burning. Watergate was about explode. Nudity, gore, and four-letter words were appearing on movie screens everywhere.
I was the staff cartoonist at the Edgewood High School Iliad, hijacking an inch&half square in each issue to commit surrealistic nonsense, and getting an hour a day to goof off while getting credit for "Journalism" class. The teacher kept disappearing. I think she was afraid of us, or maybe it was me in particular – I had Jimi Hendrix/Abbie Hoffman/menace-to-society hair back then.
I’d draw, but mostly, read comic books (both straight and underground), science fiction magazines like Amazing Stories under the editorship of Ted White, books by Harlan Ellison, and the L.A. Free Press, and do my best to blow whatever minds happened to be around. Somehow we actually put out a newspaper, too.
One day, someone brought in the George Carlin album with the infamous Seven Words routine on it. We grabbed a record player, put it on, and delighted in desecrating that hallowed place of education with Carlin’s words of wisdom that would soon influence the Supreme Court and the FCC.
Then, when the buzzer called us to go to our next class, I ran into a friend who was just coming out of the classroom next door. He was laughing so hard he almost pissed his pants.
It seems we had the record player loud enough so that it could be heard through the walls of the pasteboard building. The teacher on the other side of the wall, a clean cut Fifties-type guy, heard it all. He probably never heard of George Carlin. Records with "obscene" language were rare back then. He did his best to keep lecturing on Psychology, listening, and not knowing what to make of it. He probably thought somebody put LSD in his coffee.
Even though that record could be heard in at least four classrooms, there was never any mention of the incident. We didn’t get in trouble. Indirectly George Carlin had taught us a valuable lesson in the Fine Art of Getting Away with Stuff: When something is far enough out of people’s everyday experience, they ignore it.
Some say that in the Information Age, this is impossible. Not true. With the Internet and other modern conveniences, people build a world where they hear and see things they feel comfortable with. If something happens that is out of their selected norm, they ignore it. If it’s hard to ignore, they complain, but you’d be surprised how many things people blur out their consciousness if it forces them to think too much.
How do I know this? I’ve made it my lifestyle.
And I have George Carlin to thank for it!
at 2:00 PM