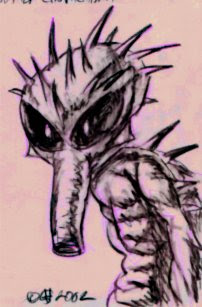 The weird stuff I write and obsess about laps over into a category that is fashionably called “paranormal.” I prefer the old terms “occult” or “pseudoscience” myself, but I guess you gotta use hip lingo so people can understand you. People are often surprised to know that I’m actually a skeptic.

Yeah, weird stuff happens. It even happens to me. But just what the hell all this weird stuff is -- is the issue.

Given the right kind of stimulation, the human brain gets creative in incredible ways. I’ve already written about this as the Monster Reflex. This awesome creativity confuses us. Often we are compelled to believe our scrambled senses.

The problem with that is, we are capable of believing in anything. It is the greatest strength and the Achilles heel of our humble species.

Technology just makes it stronger, and amplifies the confusion.

Which brings me to what I call, the Chupacabra Effect (yeah, I know that the proper Spanish word is Chupacabras, but as a native Spanglish speaker, I prefer the North of the border bastardization, cabrónes). In the past, the human habit of storytelling generated legends and myths over long amounts of time, generations. With modern communications technology, this has been sped up. Let an appealing fantasy loose in the electronic neighborhood, and in no time it takes on a life of its own, mutates, and is soon a mainstay in the freak show we call civilization.

When Elvis died, he was just a washed-up teen idol. With television, it barely took him a generation to be come a full-blown saint, with shrines, temples, miracles, and sightings. It took Jesus a lot longer to accomplish that. Michael Jackson did it over one weekend.

As with El Chupcabra, it was powered by the World Wide Web.

I remember back in the Eighties, watching Primero Impacto on Univision, seeing the first stories about a strange blood-sucking creature in Puerto Rico. It was about the same time that Michael Crichton’s Jurassic Park became available in Spanish. Soon people in rural parts of Mexico, Central and South America were including speculation about genetic engineering in their eye-witness reports.

And the creature changed. At first crude drawings showed spiny, teddy-bears with wings. Then it got bigger and more reptilian. Later proper fangs were added. Then the black almond-shaped UFO pilot eyes.

Recently, in Texas there was the stuffed blue-skinned mutant coyote head, and some more coyote-type photos.

This is what happens when information technology meets folklore. Instead of an enlightened age, we find ourselves with ever-expanding media for irrationality.

The cliché: “That can’t be, this is the Twentieth Century,” should be replaced with: “This is the Twenty-First Century, people will believe anything.”

Scary, yes, but you don’t have to believe in the Fijee Mermaid to appreciate the artistry that went into her creation and presentation. P.T. Barnum’s Art of the Humbug was enjoyed by believers and skeptics alike. Learn to revel in absurdity, because we keep making more of it.
at 9:55 AM