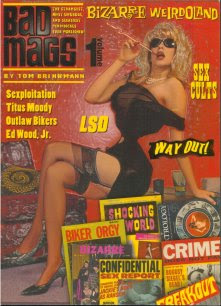 Among the other turmoil sweeping over the world, magazines are dying. Not just individual publications, but the entire medium. The World Wide Web is killing printed publications, perhaps the forests of the world will be spared.

I’ve always like magazines. I’ve written for them. They’ve given me a great deal of pleasure.
The funny thing is, I tend not follow any one particular magazine for long time. Nobody has ever published a magazine that was "me." I buy an issue, if I like it, I buy another, but usually I don’t subscribe for very long. I never assume that these things are put together with me in mind, I don’t think I’ll ever see such a thing.
What I look for in a magazine is weirdness that makes me smile and feel that the world is stranger than most people like to think.
That’s why I enjoyed Bad Mags Vol. 1 by Tom Brinkmann so damn much. It’s just the sort of celebration of trash culture that I live to wallow in. It claims to be about "The Strangest, Most Unusual, and Sleaziest Periodicals Ever Published, and delivers.
The mags covered came out from the Fifties to the early Eighties. Today’s scholars call them "men’s journals." Their main selling point was usually women in various states of undress, and the law required some written material to provide "redeeming social importance." In the days before it was okay to show pubic hair, feverish imaginations went wild on low budgets.
So here’s sadomasochism, lesbianism, transvestites, drugs, beatniks, hippies, bikers (from the first reports of the Hells Angels, to the magazines that institutionalized the lifestyle), sexploitation films, wacky visuals, and unhinged writing. The impression is that somewhere, out there, usually near or in California, people are going berserk and getting all kinds of bizarre thrills that you’ll never experience in your humdrum hometown. Fear not, for the price of a magazine, you too can taste the weirdness.
For me, a lot of the appeal is the unashamed artlessness of it. No pretension, just, "wanna see something bizarre?"
This a world where women with soft bodies and natural breasts run wild. A young John Holmes can be seen kissing a green-skinned, pointy-eared girl. The works of Russ Meyer and Titus Moody are celebrated. William Rostler is evoked. Ed Roth’s biker years are documented.
And there are descriptions of entire magazines written and edited by Ed Wood – with lengthy quotes that will make your head spin. No one could let loose the creatures of the subconscious like Ed Wood. When is someone going to publish a collection of his short stories?
After looking at what Horror Sex Tales, Bizarre Life, Wild Screen Reviews, Shocker, Freakout, Heads-Up, Raunchy, and Way Out had to offer, it’s not surprising today’s magazines going under. I’m going save my money for Bad Mags Vol. 2.
And hope the craziness of these mags will be recreated in the entertainment modules of the future..
at 3:35 PM