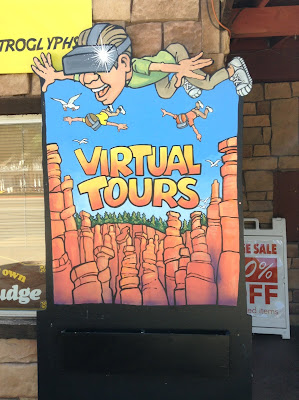 We couldn’t wait to get out of the air-conditioned delusion of Phoenix. Going north on I-17, I saw a lot of sacred datura blooming by the roadside. When we hit the Navajo Rez a billboard proclaimed: PROTECT OUR FUTURE. STOP METH ABUSE, while outback murals provided alternate vistas.

As we made it into Utah, toward Kanab (“A Western Classic” according to a sign), I mused that “Nabbed in Kanab” would make a good title, bit couldn't think up a story for it. 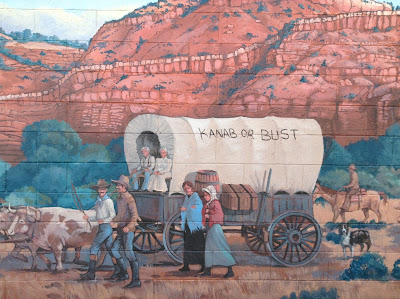 The Lone Ranger posters decorating our motel fit in with the the Hollywood Wild West decor. Here, John Wayne and other celluloid buckaroos watched like patron saints. 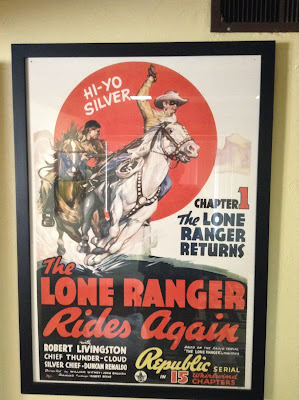 After I found MSNBC so Emiy’s mother could find out, “what that idiot in Washington did today,” we realized that we forgot to pack her box of wine. Where can a 98 year-old woman get her evening glass of wine in a town where our motel was across the street from the Mormon temple that was sandwiched between two banks? The streets were full of Caucasian tourists speaking Teutonic tongues. The young man gathering up shopping carts at the pioneer daze mural-festooned supermarket looked nervous as he explained that they only sold beer and the liquor store was closed Sunday. 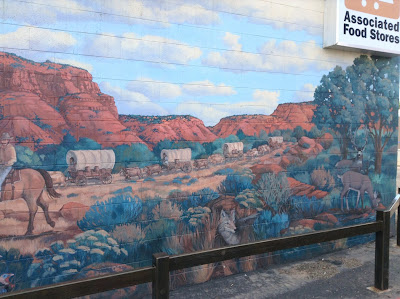 Luckily, we found the Wild Thyme Cafe, where she could have a Chardonnay with dinner.

In the morning, I saw Asian tourists and white-haired, middle class bikers as I crossed the parking lot to the complimentary breakfast bar.

On TV there were news stories about Utah’s opiod crisis, and how recent immigration restrictions were hurting the state’s economy, as well as a commercial for a place called Chick-A-Rama that bragged about their mac and cheese. 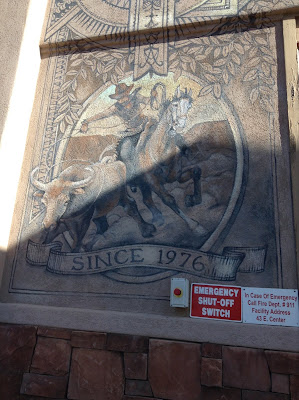 We packed up as Trump was getting ready to talk about the new NAFTA, filled up at a gas station wrapped in faded cowboy murals, and soon Emily was saying, “Oh my! This sandstone is fabulaire!” 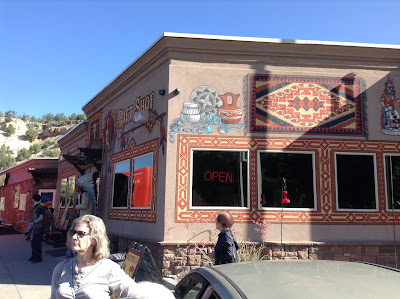 Past more roadside sacred datura, we took a restroom break at a gas station with murals with more of an Indian theme that sold coonskin caps and buffalo jerky. Japanese and German tourists milled about like a deleted scene from The Man in the High Castle.

A town had the Orwellian name of Orderville, and there’s a Glendale, Utah. 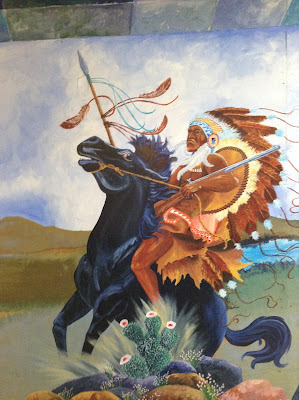 Soon we reached Parowan, on the Old Spanish Trail, as opposed to an old Mormon one. A sign in a store window told of PAROWAN, UTAH’S PUBLISHED AUTHOR, as if only one were permitted per town. The State Liquor Agency (Utahan for liquor store) was closed on Sunday and Monday. Fast food joints sold tacos and burritos as well as hamburgers and hot dogs. We even found a Mexican restaurant where Emily’s mother could have a sangria with her taco salad. 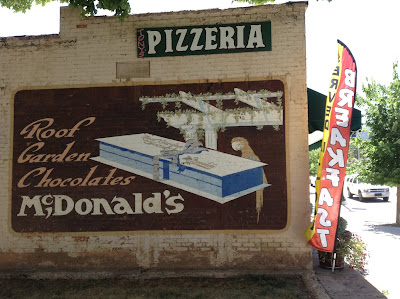 We got going bright and early the next morning to find that the State Liquor Agency was still closed at 8 AM.

So it was off through eerie, abandoned-for-the-season, snowless ski-country that looked like a transplanted stretch of Switzerland. Then the hills were full of lava and dying trees. Some deer pronked into the middle of the road, but Emily was quick with the brake pedal. 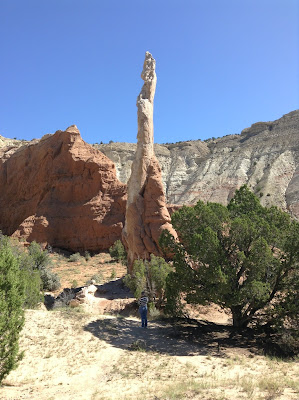 A huge photo portrait of John Wayne watched over us as we got coffee and danish at a Panguitch gas station. 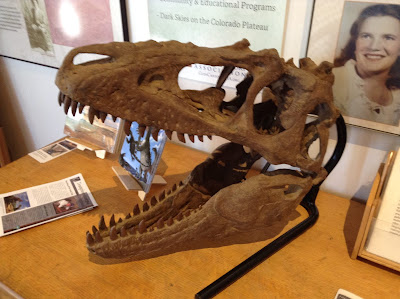 As we headed toward Bryce canyon, the forest gave way to red rock hoodoos, psychedelic/Barsoomian landscapes, burned and beetle-devastated forests.

We finally found wine for Em’s mother at the State Liquor Agency in Bicknell, ten minutes from Torrey, past some grazing bison. They were playing a bluesy version of “Summertime.” 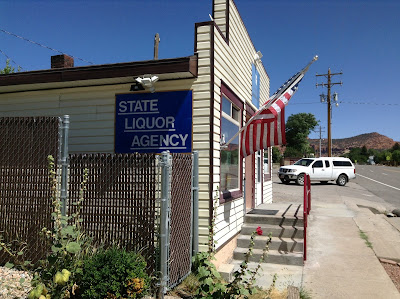