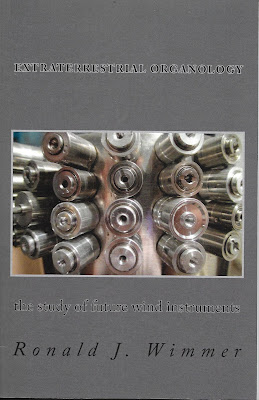 Ron Cobb, the cartoonist who is best known for designing the spaceship and most of the hardware for the movie Alien, once said that, “Science fiction has always been a verb to me.”

Sadly, most sci-fi products these days just want us all to keep being good, hungry, passive consumers. Buy, don’t do. Consume, don’t create.

Extraterrestrial Organology: The Study of Future Wind Instruments by Ronald J. Wimmer, on the other hand, says, “May this inspire you to make your own musical instruments.” Don’t just read, or watch entertainment about exploring strange new worlds, seeking out new life, and new civilizations, and boldly going where you have never gone before, but create the instrumentality of the future. Create new culture. Make the future.

It is inspired by Jesus Christ, who allowed Wimmer to hear, “For approximately five seconds . . . angelic music.” He immediately realized that the sound would be impossible to replicate. “That is when I had the realization to make musical instruments.”

He also lists as inspirations: Antoine-Joseph Aldolphe Sax, inventor of the saxophone,René Stapp, inventor of the Jupiter land speed record car, a Japanese Zen haiku poet and a Buddhist monk. Photos used show that he is familiar with funky TV and movie productions from the black&white era. Talk about cultural diversity.

He also looks like a classic science fiction fan. One photo shows him with ufologist Dr. Staton Friedman and Kathleen Mardeen, niece of Betty Hill of the well-known Betty and Barney Hill UFO incident.

It’s a slim book, but is packed with actual content, as well as spaceship paintings by his wife, Luela, and lots of color photos of historic, weird instruments, and those created by Wimmer, often with him holding them and wearing an impressive array of sci-fi regalia.

In the text, facts blend with science fiction. “I suggest you research orgone and its discoverer Dr. Wilheim Reich . . .”

Wimmer’s instruments have been displayed in galleries and art shows in Arizona. The art form has incredible possibilities. I’d like to see more people creating such wonders. 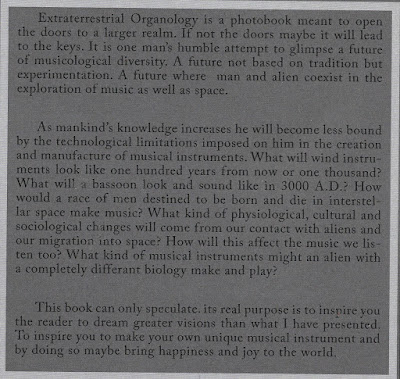