Soon I had to run to stay ahead of the saguaro. Then I -- or maybe the Krell chip -- got fed up. I stopped, turned around and said, "Who are you?  What are you?  What do you want?"

A white homeless man, with his hair and beard in crude dredlocks, whose sunburn seemed to be breaking down his DNA as he sat in lotus position on the sidewalk said, "That's right young fella, we're all cacti under the skin -- learned that from peyote!"

The chip had me bee-lining it to the library. The saguaro didn't move. Mr. Dredlock Peyote cracked a beatific smile.

With my blood-stained bandages and bunny-suit, I didn't stand out at the Central Library among the unconscious homeless, the migrant workers, Native Americans with French-braided hair and Budweiser bandanas, Indians in sports shirts and saris, Nigerians in mirrorshades speaking Yoruba into cellular phones, a low-rider girl with a Virgin of Guadalupe T-shirt, and an Anglo nerd with a gun and knife on his belt and a NUKE 'EM FROM ORBIT T-shirt. "Phoenix is the new Interzone," as Doc Burnout says.

The chip didn't know where to start at first, but soon had me keying away at a computer terminal, making random stuff flash on the monitor.  A primitively animated cockroach scurried across the screen followed by HELP!  I'M BEING HELD PRISONER IN A BULGARIAN VIRUS-FACTORY! Soon I took charge, found some books I was interested in, and got them off the shelf.

I'd been trying to get through The Satanic Verses ever since Rushdie got the death penalty for it.  Now I finished it, and went through the Koran so I could better understand all the references, in less than a half hour. Reading is usually a slow-go for me that can cause drowsiness. Somekinda brainpan fallout here!

Next I went through The Hacker Crackdown, which Doc Burnout had recommended, in about four minutes, chuckling here and there; if only Chairman Bruce knew what was really happening! Then I read Carlos Fuentes' Christopher Unborn(about 20 minutes), and I could see why my dad liked it so much. Ishmael Reed's Japanese by Spring (3 min.) was just as dead on about postmodern multicultural relations and as funny as Obeah X15 had said.
I read all the day's newspapers (18 min.) and was in the process of pulling the complete works of William Burroughs off the shelves when three-inch nails in a black-velvet glove like the claws of the Aztec goddess Itzpapaoltl dug into my shoulder.

NEXT WEEK:  TRAIL OF THE UNDEAD VOLKSWAGEN 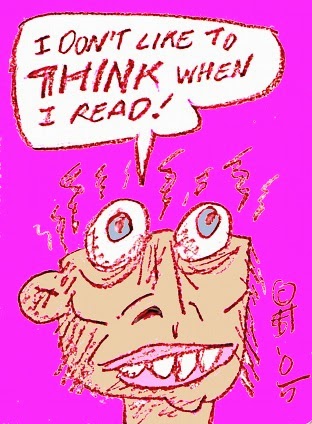