CHICANONAUTICA GOES TO THE CULTURA WARS 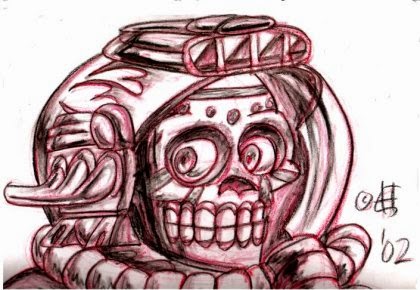 It has to do with Chipotle's Cultivating Thought branding campaign, and it's lack of Latino writers:

It inspired Rudy Ch. Garcia to propose #LatinoStory4Chipotle. Which inspired the following story:

Got a message from Victor Theremin: MEET ME AT EL BRAVO, MUY PRONTO!

I rushed to mi troque and zig-zagged through Phoenix. I hadn’t heard from Victor in years. And I needed no excuse to indulge in El Bravos’s red meat burritos.

I passed a burning Chipotle on the way.

At the restaurant, I looked around. No Victor. But I saw someone dressed as a saguaro cactus at a table, sitting next to a brain in a plexiglass box.

“Ernie, I’d like you to meet Flash Gomez,” the brain said in Victor’s voice.

“Flash! I haven’t seen you since you disappeared back in the Nineties --”

“Yes. A lot has happened since then.”

Then agents in FBI-ish suits and sunglasses burst in, brandishing sparking stun guns.

“Don’t worry, I’ll take care of this,” said Victor’s brain. It began to glow with a pulsating yellow light, accompanied by an electronic whine. They pulsed and throbbed faster and faster.

Soon I was dizzy and couldn’t see.

The next thing I knew I was in my backyard, seated in full-lotus position facing the big cow skull. I had the aftertaste of salsa in my mouth and a tingling in my inner ears. When I got up and peered over the fence, everything looked wrong.

Instead of our neighborhood, I saw a Martian landscape, just like the NASA photos. Except there was a Chipotle on a nearby hill. It was burning.