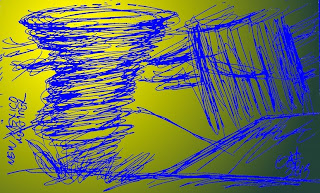 After we took off for New Mexico, I kept seeing nopales – prickly pear cactus – and it got me thinking about a nanohudu'd version of the species adapted for my Mars stories. It would be bigger, and with more “meat.” Traveling through Aztlán always gives me Martian ideas.

In Northern Arizona we saw a lot of military Humvees on the road. The gas station near the Cliff Canyon/Yavapai Apache Casino was clogged with a caravan of them. The mass fuel stop was a major operation with heavy machines and uniformed bodies scrambling to . . .

What were they up to?

The Supreme Court had just stirred things up. Record heat was predicted for Phoenix. And there were wildfires burning--- smoke and political turmoil were in the air. I was braced for it, imagining riots, scenes from High Aztech being acted out in real life.

Yeah, I needed a vacation alright. 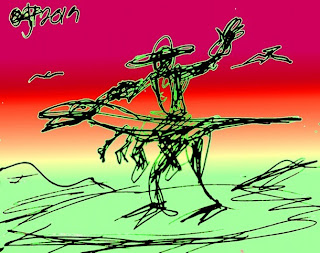 Soon we were past Holbrook, into the Petrified Forest, dinosaur folk art country, and colorful plaster monsters – sometimes eating dummies or grimacing with two heads – populated the roadside. I wondered if there was a local species that cowboys could ride on – for an idea I have for a mural, or at least a painting. 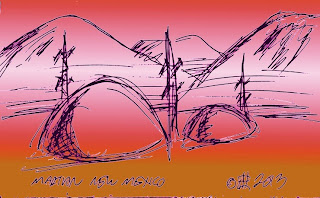 Then I got an idea for a cover for my unfinished Paco Cohen, Mariachi of Mars novel. The gods of sci-fi were mojo messaging me again.

Suddenly, there were hogans and eight-sided hogan-like buildings. We had entered the Navajo Nation. No border. No military. Nobody asking for IDs.

And in the distance, in New Mexico, in Zuni country, there were clouds, rain, and lightning.

Past Gallup, in front of red, wind-sculpted mountains was a refinery that looked like a Mars colony.

Then rain hit us like running into a wall. It dried up, and we saw a dust devil. 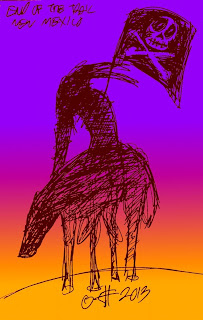 And there was a rusted iron cut-out of the End of the Trail Indian, only he was holding an actual skull-and-crossbones flag.

Native America with an attitude.

Under the looming gray clouds, a curious, black silhouette appeared. It had two propellers. A strange flying machine – a Vertical Take Off And Landing rig with its airfoil tilted up. We watched it land like a helicopter.

This was UFO country, just before the lava fields and ice cave. At a gas station, as we topped off the tank, the overhead radio played the Byrds' Mr. Spaceman.

I don't know if it's just me, but the Indian Casinos seem to be blending into the landscape, no longer looking like an intrusion. In another generation, the kids will assume that there always were casinos here. Ancient ruins will be interpreted as early versions of Las Vegas.

White flakes blew through the air, not moving like snow. They were ashes. There was a fire beyond Truchas.

“Some of the gray stuff in the sky is smoke, not clouds,” we were told.

Then it started to rain. They hadn't had any rain since February. 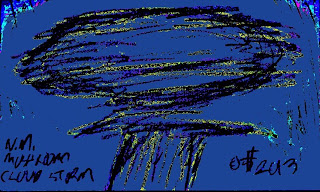