UFOS AND BRUJOS OVER NEW MEXICO 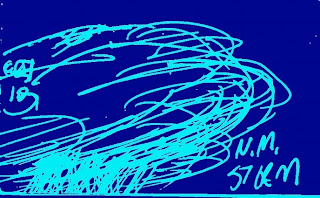 In 1776, the Founding Fathers were far away from New Mexico, where people lived with the Giant Snake God and witches. You can still see adobe buildings with their window frames painted blue, a traditional way to ward off evil spirits.

In Truchas, when I started reading Marc Simmons' Witchcraft in the Southwest: Spanish and Indian Supernaturalism on the Rio Grande, a powerful wind blew the door open. 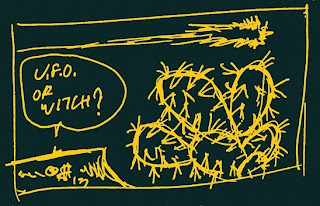 Simmons goes into detail about witches flying as fireballs. Such things have been seen over the skies of Aztlán for centuries. These days we call them UFOs, and think that they are space vehicles. I do wonder if the ancient witch and Space Age visitor theories could both be wrong . . .

Roswell, the UFO Mecca, is in New Mexico. All along the highways, cow crossing signs were augmented with UFO stickers. For miles and miles. Somebody went to a lot of expense and trouble.

Reminds me of a passage from Pat F. Garrett's The Authentic Life of Billy the Kid:

Shortly after the killing of Grant, the Kid made a trip down the Pecos, remaining for some weeks in Roswell. 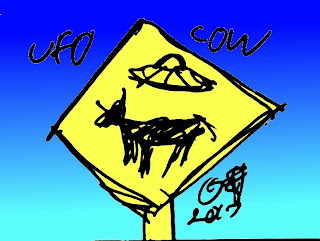 Another method of witch flight is to step into a dust devil and take off. We saw a lot of dust devils. Could tornado-lassoing Pecos Bill have been a brujo? Or something else? 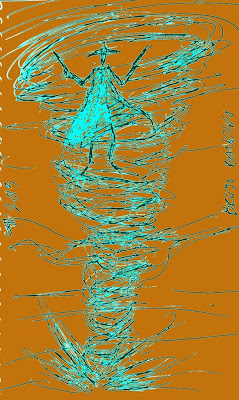 Simmons devoted an entire chapter to witchcraft among the Nambé. I thought about it as we drove through their reservation.

At the Bandelier National Monument, we revisited the ruins of the Tyuonyi (QU-weh-nee) AKA Frijoles Canyon Pueblo. The datura was blooming there. Datura is often used in local witchcraft. 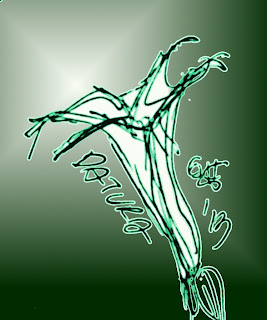 We also saw the zigzag symbol of Awanyu (uh-WAHN-yu), the feathered serpent associated with water. 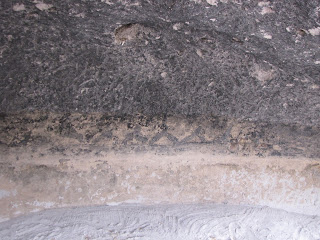 New Mexico tribes have legends about the Aztec emperor Montezuma. Simmons suggested that they may have been brought by Aztec slaves of the Spanish, but Anwanyu is older than that. The river serpent still shows up on freeways and urban murals. The Río Grande flows down Mexico way. This is the land of the Great Snake God. The connections between similar cultures may go back farther than modern academics are willing to accept.

In Española, there was a place that sold KNIVES & HOOKAH PIPES and was decorated with psychedelic graffiti. In a Walgreens, Arlo Guthrie's classic marijuana smuggling song “Coming in to Los Angeles” (he pronounces it “Los An-juh-LEES”) played overhead. And on the Nambé rez, there was a mural of a brown-skinned Rasta-looking Jesus.

Simmons wrote that marijuana repels witches and neutralizes their magic.

A local casino was advertising a reggae festival. Could there be an influx of Rastafarian immigrants in the future? 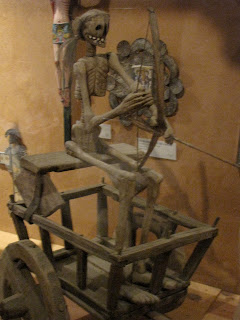 In the Hacienda de los Martinez, now a museum, we saw several magnificent examples of the Death Cart: a female skeletal figure, sometimes robed, and often armed with bow and arrows or an axe. She rides a cart, and is brought out in religious processions to remind people that they must die. She's a combination of Santa Muerte and the Grim Reaper – one badass babe!

I found myself imagining a modern version, driving a car, and toting a machine gun . . .

As for modern witchery, the Sancuario de Chimayó has been plagued with vandalism and theft. A face of Jesus was torn off a crucifix; the faces of statues were covered in red wax. Pentagrams were drawn. A heavy metal/horror movie overlay on centuries of magic.

Maybe they need to bring back their penitente traditions. Ritual crucifixion could do the thugs a world of good. 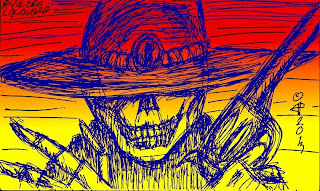