A WILD RIDE THROUGH UNPAVED ARIZONA

As we turned onto Cave Creek Road, a woman with ruined knees was crossing the street. Later we saw a one-legged man and a woman with the burned-out face and body of a meth addict.  Bruegel would have put them in the frame if he had painted a scene from this part of town.

There were also a lot of impressive, colorful, hand-painted signs – several that I didn't see the last time we were here. Looking for a 21st century renaissance? Forget the art schools and galleries. Check out the walls in the parts of town where graffiti battles for turf with talented displays of automotive businesses.

Soon we were charging though the desert, into the mountains, down MCDOT (that's Maricopia County Department of Transportation) road, thinking of a McDot's Road heading for places where we could snag rocks for the Venusian Garden. 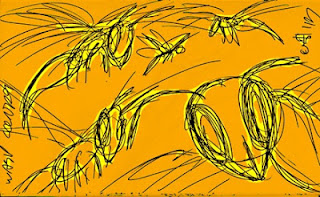 The pavement ended and we were in wasp country – which, with all due respect to Hunter S. Thompson, is more dangerous than bat country. Em and I have lived in neighborhoods where bats fluttered around overhead in the darkness – it's actually quite pleasant. Yellow jackets press close, looking mean, stingers ready.

On Seven Springs Road, the wasps dogged us, Once again there were NO SHOOTING signs, spent shotgun shells, and brass from .22 and larger rounds. Shows what kind of respect they have for the law in Sheriff Joe Arpaio's territory.

Atop trees, I kept seeing squirrel's perched on naked branches, noses pointed to the horizon like sentries. What were they looking out for? 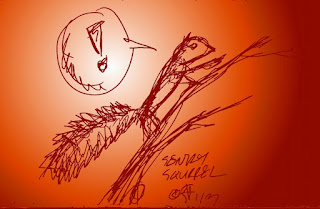 Then it was official: a sign said, PAVEMENT ENDS.

Even though there were more non-deserty bushes and trees, nopales, AKA prickly pear, AKA paddle cactus grew all over the place. The prickly pear fruit is well-know as being edible, but in Aztlán the entire cactus – once you've peeled it and removed the spines -- is known as a food source. Chop it up, fry it with your eggs, add some salsa, and you've got yourself some fine huevos rancheros.

If civilization collapsed, I wonder how long they would last? Arizona does inspire post-apocalyptic visions. 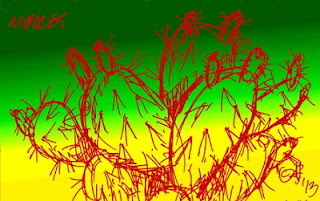 A cloud of wasps soon chased us away from a wash with a rusted-out, desert-eaten car and a stone bridge. As Em put it: “One was fucking stinging my hat!”

They seemed to follow us wherever we went, buzzing around El Troque's vents. We speculated that they were attracted by the vapor from the air conditioner (NOTE FROM EM: or because of the H20 vapor that results from combustion).

That didn't explain why they kept swarming us when we got out to look for rocks.

They buzzed around while I got a close look at some huge Arizona ants. These were the kind that came when the bad guys in a western would bury someone up to his neck in the sand. Who know's how big their colony was. How long before they invade Phoenix? 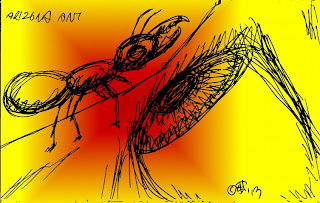 Not far away from the ant hill was some mountain lion scat . . . lots of it. The lion was probably sleeping, but the wasps were wide awake.

And suddenly, some wild bees gave Em warning nudges, and we moved on.

None of this stopped us from nabbing some gorgeous rocks.

Back on Cave Creek Road, there was sign saying there was an 80 decibel limit. I wondered how you were supposed to tell.