UP CAVE CREEK WITHOUT A PADDLE 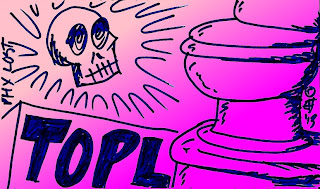 Once upon a time, Emily and I lived near Cave Creek Road. Two of the my favorite landmarks were a tower of toilets, and a pink bar with TOPLESS painted on it in huge black letters. I'm sorry to report that neither lasted into the New Millennium.

After a breakfast of doughnut holes, Em and I went off take Cave Creek Road to the town of Cave Creek. I was pleased to see hand-painted signs saying things like BAD CREDIT AUTO, and business-oriented murals, along with dayglo auto parts robots and a Pet Food Depot with a giant bulldog statue in the back of pickup.

All the flags were at half-mast for the Boston Marathon bombings, but the street couldn't help being cheerful.

We passed Mohawk Plaza. There are no members of the Mohawk tribe in Arizona, but these days, I see more young Native Americans wearing that hairstyle.

Saguaros were propped up with braces like soft objects in a Dalí painting. Yellow flowers blazed on the roadside palo verde trees. Near the intersection of Carefree Highway and Cave Creek Road was WalMart. 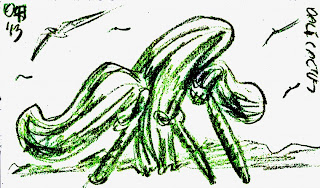 They often build a shopping center – or a WalMart – first, hoping it will attract people out into the desert, to places like the Lost Acres housing development. I often wonder if the first establishments on Mars will be WalMarts.

Soon we were passing through a community of rich people. The homes were all tasteful pseudo-adobe. The desert landscaping seemlessly blended into the real desert. A coyote poked around these properties.

Near a HORSE XING sign and a corral, Em spotted an agave with multiple stalks. She got out at took a picture of this biological curiosity. She attracted the attention of one of the horses. We got out of there before being noticed by anybody's private security team.

Finally, we found the Cave Creek Regional Park, where I found out about the Arizona Blond Tarantula (Aphonopelma chalcodes) – probably no relation to the current governor.

While hiking on the park's trails, looking over an incredible valley, Em said, “I wish all the houses would go away.”

I was reminded of the Rewilding concept, and a story idea inspired by it – something else to haunt me until I write it. I found myself imagining a future Arizona that is mostly parks, nature preserves, and Indian nations, financed by tourism and casinos. 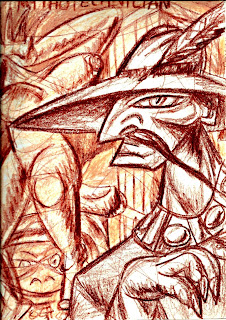 “This place is magical!” Em said. More than once.

We had lunch at El Encanto, a wonderful, ornate, Mexican restaurant that would make a good location for a surrealistic western. We ate on the patio next to a pond with geese, ducks, and turtles. Birds fluttered around, grabbing scraps while Santana's version of Tito Puente's “Oye Como Va” played.

I imagined a gunslinger meeting a patron to discuss a dangerous assignment. The scavenging birds get bigger . . . finally becoming vultures . . . out of the pond, something large and strange rears its ugly head . . .

I rode home with a cow skull on my lap.  Now that's real happiness. 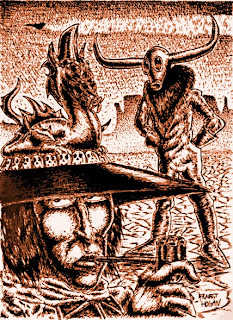