BEYOND THE AIR-CONDITIONED DYSTOPIA

As the weather warms up, Metro Phoenix seals itself off in air-conditioning. It's like living on an enclosed colony on a hostile planet. People deny that they are living in a desert, or even out West. They plug into media and entertainment that provides pleasant, dystopian delusions.

Meanwhile, biological bombs turn the hills yellow and purple as they trigger allergic reactions. Arizona is out there. And it's not what people think it is – not even what the people who live here think it is.

So Em and I got into our troque and took a spontaneous road trip into the spring fever dreams. Besides, we had never been down that part of Highway 89, the far northern stretch of which has recently become impassable between Gap and Page due to a landslide, but there was plenty between us and the slide area.

Or as Em, put it, “Just driving on the freaking road is fun.”

Down Highway 60/Grand Ave in El Mirage we passed the Babylon Private Hookah Lounge, an abandoned building with bilingual NO TRESPASSING signs, occasional, ancient stone structures that were too damn close to the road, and a giant, rust-covered mental mariachi. They were all across the railroad tracks from twisted rows of jagged mountains.

Just before Wickenburg, “Where the Wild West is Still Wild,” was Buzzard's Saloon, and more rusty behemoths for sale. 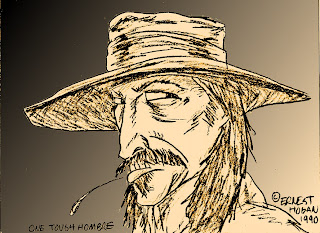 Then we hit Highway 89 into what for us was unknown territory: Yavapai County, magical little towns like Yarnell, names like Skull Valley, long-horned cattle wandering mountains full of granite that were as old as the Grand Canyon, churned up by power of the Earth Mother.

At one point we passed a guy in a black suit, pushing his bike uphill.

We had lunch in Prescott, at St. Michael's Bistro on the 100 block of South Montezuma Street, that is still known as Whiskey Row because it was once lined with saloons. Some of the saloons have become restaurants, but it's all mostly art galleries these days.

There's something about these writhing mountains that generates artistic activity – ancient forces at work. This is also uranium country. And wide . . . open . . . spaces . . . that do have interesting effects on the human brain. 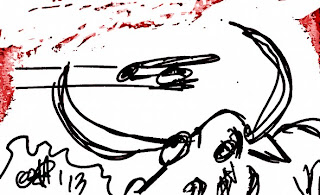 On a hill in this high-altitude spaciness, like an abandoned castle, are the ruins of Tuzigoot, which is an Apache name, mispronounced Anglo-style, for a Sinaguan pueblo. Sinagua is a Spanish for “Without Water.” They harvested a lot of agave fiber that they used for clothing. The skeleton of a red Macaw found there suggests that they traded with the peoples of Mesoamerica. They moved on around the time of the last volcanic eruptions.

There are lost worlds along these lost highways.

More recently, abandoned copper mining towns like Jerome, with crumbling buildings haphazardly attached to treacherous mountains, are getting dressed up with bright paint and art galleries, and an artsy-fartsy/hippy-dippy attitude. It triggers visions of a post-redneck Arizona and fantasies of retirement, and painting sci-if Wild West neo-kitsch to sell to the tourists.

But does anybody come up to these lost places to buy art? How long will this culture last? When will these towns become archeological sites?

I wondered that while we contemplated the quiet waters of Dead Horse Ranch State Park, and herons contemplated us.

As we headed back to Phoenix, a lot of police vehicles, with lights flashing and sirens blasting, charged back in the direction from whence we had come.

Something was up. And the wildflowers were pretty.