ROAD DAZED, DEEP IN THE HEART OF ARIZONA 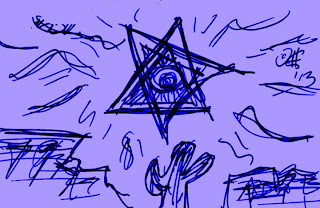 You never know what you're going to see when you're on the road in Arizona.

There it was, strange graffiti inside the bathroom door of a Black Canyon City gas station: ZION. It was accompanied by an eclectic assortment of mystical symbols – the Star of David included, of course.

Forget your stereotypes. They won't do you much good on these roads where this time of year you can often see yellow wildflowers all the way to the horizon.

Soon we were going eastward, down the 260, along rocky, spacy mountains. Turns out the Fossil Creek Road was closed. We were hoping to take it to the Fossil Springs Wilderness, but that would have to be some other time.

Suddenly, Em pulled over and said, “I need to do something a little bit experimental – I'll be right back.” She went and got up close and personal with some of the volcanic rocks.

I got out of the troque and followed her. I grabbed her waistband, so she wouldn't fall into a canyon with mysterious footprints in the sand at its bottom. 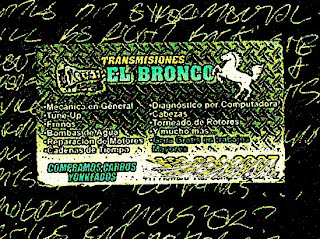 The footprints looked big, could have been human, but there was no way to be sure. They were a long way down. We were also close to the Mogollon Rim, home of the Mogollon Monster, our Arizona version of Bigfoot.

Further down the road we stopped again. Em oggled some weird rock formations and speculated about their origins, while I found a business card for Tranmisiones El Bronco and an empty L&M cigarette pack.

I had visions of the Monster smoking cigarettes while having the tranny on his carro yonkeado worked on.

Then I heard a helicopter approaching. Were about to be busted by some clandestine agency?

I was expecting to hear: “GET BACK IN YOUR VEIHICLE AND MOVE ON. THERE IS NO CRYPTOZOOLOGICAL PHENOMENON HERE. WE HAVE YOUR LICENSE NUMBER AND HAVE IDENTIFIED YOU BY FACIAL RECOGNITION SOFTWARE. DO NOT TELL ANYONE ABOUT THIS OR YOU WILL BE ARRESTED.”

But no, it wasn't a helicopter -- it was a group of bikers, some on three-wheelers. 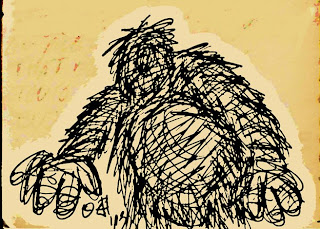 It was April, and there were patches of snow by the roadside, under the pines. We were high in these mountains.

In the town of Strawberry, we found the other end of Fossil Creek Road. It was closed, too. We'll have to schedule an expedition there for the future. Meanwhile, monsters or anything else were safely hidden in the Fossil Springs Wilderness.

The town of Pine had some interesting businesses: Rusty's Taxidermy, Arizona Gun Runners, Sidewinder's Saloon, and THAT Brewery & Pub.

At the Tonto Natural Bridge we proceeded to “Enjoy with caution” as the signs said, getting our adventure fix among the natural hazards, “scrambling from rock to rock.” Em was soon up to her waist in the creek (until she remembered her wallet was in her pocket). There was an active bee hive over the main waterfall, and we saw forms more fantastic than Max Ernst's decalomania paintings.

Toward Payson, guys were pedaling bikes loaded with cargo up the mountain roads.

In Payson, we had Mexican food at El Sierra again. The misspelling on the hand-painted sign had been doctored, but was still funky. The food is good, and the psychedelic sombreros and fantastic carved and painted chairs are still burning after-images into patrons' retinas.

On the way home we passed the Jim Jones Shooting Range. Must be some other Jim Jones. The infamous cult leader died in that Guyanese mass suicide decades ago. Still, I imagine folks taking shots of cyanide-laced Kool-Aid . . .

The blazing wildflowers took my mind off such things as we made our way back to civilization.

Back in Phoenix, on the 202, a sign announced that HAZARDOUS MATERIALS MUST EXIT. 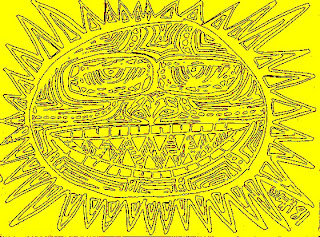