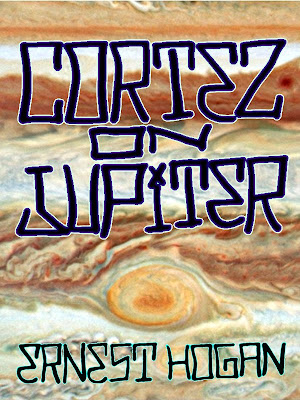 Look out, civilization-as-we-know-it, Cortez on Jupiter is finally available as an ebook!

Kindle users can get it from Amazon for a mere $.99.

Those of you with iPads, iBooks, Nooks, Sony Readers, Kobos, and most e-reading apps including Stanza, Aldiko, Adobe Digital editions, and others, can get it from Smashwords. Also for that smoking deal of $.99.

Psst! For just one month at Smashwords, the coupon code LH74B will allow you to get it for $.00, to get this ball rolling and encourage reviews, discussions, and general hysteria.

I'm also available for interviews, guest blogs, and other acts of shameless self-promotion.

Buy the way, the picture of the Great Red Spot on the cover behind my graffiti-lettering is a public domain image taken on July 8, 2008, and part of a HubbleSite news release from July 17, 2008. Thank you to NASA, ESA, and A. Simon-Miller of the NASA Goddard Space Flight Center – your technical work is more mind-blowing than my artistic rampages.