BLEEDING ON THE SALES FLOOR 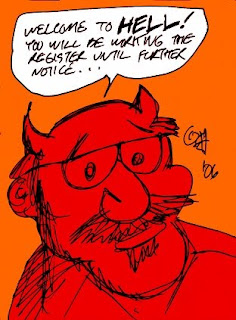 A Little Old Lady from Hell smiled as she held up her bleeding finger. She had cut herself on a book. Ah, the paper cut! That old bookstore hazard. So easy to do in the excitement of a liquidation sale.

Unfortunately, I was at the register, ringing up a customer who was buying a stack of books. There was also a line people, products in hand, waiting to be rung up. But the blood bead was getting bigger.

I excused myself, hit the button on my walkie-talkie, and said, “We need a bandaid for a bleeding customer up here.”

“There's some the drawers.” Crackled in my ear.

Before the blood could drip I handed the Little Old Lady from Hell a bandaid. She put it on her wound, then asked for a tissue.

We were out of tissue. But a lot of employees had had colds lately. Looking around, I found a roll of toilet paper that was being used instead. I grabbed it and handed it over. I felt I had dealt with the situation in a manner worthy of Buster Keaton or Jackie Chan.

Then I flashed back to other paper cuts. It had happened to me on occasion, while furiously wrangling books. It can especially happen during a holiday consumer frenzy. You feel the bite. See the blood. Where's a bandaid when you need one? 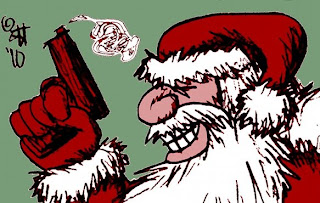 Unfortunately, you're surrounded by people who have all decided that they need your help finding some book, and they need it now. You put a hand over the cut, covering the blood, and help one person. Then another blocks your path to bandaids. Then another. And another . . .

You casually uncover the blood. Surely, someone will see the blood, and say, “Why, you're bleeding. You should go and put a bandaid on that.”

They keep coming. Even while you're hopping around to keep from getting your blood all over everything.

And I am not exaggerating. No satire or surrealism here. This is straight reporting. I know. I actually happened to me.

The truly bizarre thing, is, in telling this tale, I found out that it happened to my wife Emily, too.

It also happened to some of our co-workers.

Of course, this was back in the days when the economy was going strong, and you could get a good consumer frenzy going. Things are different now. Even at a liquidation sale, it rarely gets to that kind of cannibalistic intensity.

Now the customers come in waves that die out regularly. They all ask when the discounts will be ratcheted up, and when will be our last day. They do say how sorry they are that our store is closing, and how it's going to be inconvenient for them.

Sometimes they ask if Borders is helping us all get new jobs. I try not to laugh.

Yeah, the best way to get through this is to look at it as blood-spattered, slapstick comedy. It doesn't make any sense. It is ridiculous. And I rush around, doing my Groucho Marx walk, my Charlie Chaplin one-footed stall-&-turn, and whoop like Curly of the the Three Stooges under my breath. 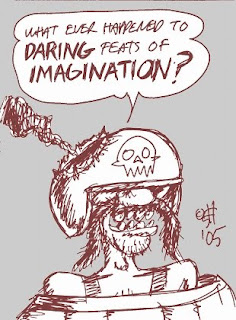