THE ART OF SNAGGING EYEBALLS 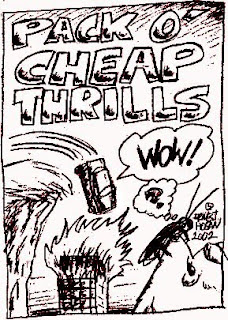 When he sent me the PDF file of “The Great Mars-A-Go-Go Mexican Standoff” to look over, David Lee Summers, the editor of Tales of the Talisman expressed concern that the Venusian Yakuza in the illustration didn't match my description in the story. I know that some writers are sticklers for their illoes being accurate representations of their writing, but I tend to agree with my friend, the late G. Harry Stine: that illustrations and covers only have one purpose, “to sell the story.”

Paul Niemiec's “Mars-A-Go-Go” drawing does just that – an example of pulp art that makes the viewer become a reader by making them wonder what the hell is going on. Sure, the body modification on the Yakuza is more extreme than in the story. But I could imagine it happening in this universe, and I will take it into consideration when I write further adventures of Spike Gershwin, interplanetary detective. Niemiec also showed good instincts in providing Spike with a hat, a cigarette, a snub-nosed .38, and a shoulder-holster that instantly identify him as a private eye, giving a vital clue as to the kind of story this is.

Too many covers and illustrations these days have nothing to say, except for, “Here's more of this subgenre, and we promise it won't disturb you with any surprises.”

Worse yet are those uninspired “character study” portraits that are remarkably lacking in character. 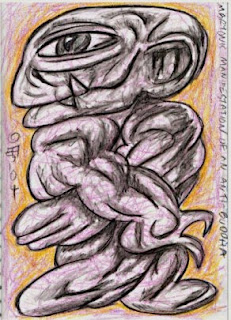 Illustrators should be studying cartooning, pulp art, movie and circus posters. Dada and Surrealism, too. Emulate P.T. Barnum and Salvador Dalí. Forget subtlety, snag the eyeballs, and drag the frontal lobes into the writing. If the art isn't an exact match for the story – so what? It never is! A good artist should try to come up with imagery that is better than what the writer, or the reader, does on their own.

Sometimes, images that give you a broad hint or provide interesting counterpoint, like in DayBreak Magazine and Flurb can also do the trick. Snag the eye, worry about the brain later. As long as it makes them want to read the text!

So, my advice for illustrators is sell the story, and go wild. Imagine that your the talker (which is what insiders call a “barker”) at a carnival. Use your visual language to get the people to step right up, put down their money, and get a load of something that will take them out of their everyday world, and maybe even blow their minds.

If you manage to outdo the writer in your creation – well, that's the writer's problem, not yours. And congratulations, if you can! 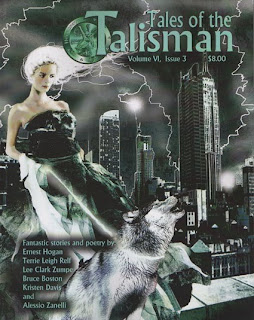