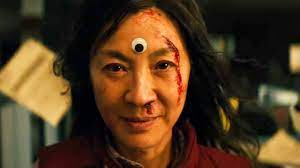 So, there I was out of the house, in a theater, enjoying what was coming at me on the screen. Yeah, I was right not to wait for it to show up on a streaming service.

I knew Michelle Yeoh was wonderful, but Everything Everywhere All at Once is. . . Words failed me. After a while I thought, I gotta review this, but how? I couldn’t think of what I would say, the way I usually do with most entertainment these days.

bubbled up in my overstimulated brain . . .

What we have here is a genuine case of Twenty-First Century Genre-Meltdown: sci-fi, action/martial arts, slapstick comedy, rom-com, all at once. I laughed my head off and was in tears at the end. 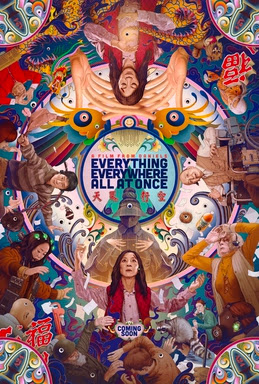 More than just a blast of endorphins you could also get from jabbing your brain’s pleasure centers with an electric cattle prod. Thoughts, ideas start coming along with the mayhem. Some in the dialogue, but most of them actually come through action. This is a masterpiece of showing rather than telling. Aspiring writers take note.

All the gut-level entertainment is about one of the great existential problems of our times: living with science, and our technologically enhanced access to information making the multi/universe larger and us and our place in it smaller. And it’s funny.

It also handles the whole concept of the multiverse better than Marvel, or any of the other corporate franchises.

I’m reminded of when I first encountered the word multiverse, in  a scene from Michael Moorcock’s 1969 Jerry Cornelius novel, A Cure for Cancer:

‘The multiverse. All layers of existence seen at once. Get it?’

And of course, most of the audience thinks it's all just sound and fury signifying nothing but a temporary lapse in the boredom that is an essential part of the pre-packaged lives they’ve bought into.

I think pop culture has finally caught up with us avant-garde spec fic wise guys. Wonder if I can cash in on it? Or at least have fun trying.