AN AFROFUTURIST ODYSSEY WITH JESUS, BATMAN, STALIN, AND OTHERS . . . 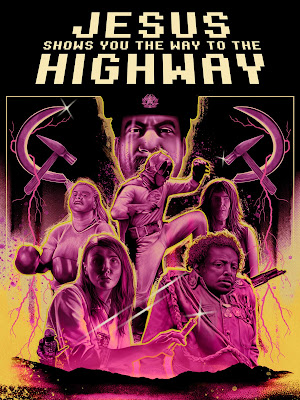 Looking for alternatives to the corporate sci-fi franchises lulling you into a false sense of security, not to mention reality? They are out there. I just ran into one that has my jaded mind, that’s been soaking up the infernal genre for more than half a century, dripping from the ceiling.

The title is totally misleading, but then the whole universe is misleading. Be misled, get lost, and find your way, or a way, somehow . . .

Hmm . . . maybe Jesus Shows You the Way to the Highway is a totally appropriate title after all . . .

What I’m babbling about is a movie with the above mentioned long, problematic title. It stars Daniel Tadesse and was written and directed by Miguel Llansó. Tadesse is a dwarf, and there isn’t much about Llansó on Google. They also collaborated on another film, Crumbs, a poetic post-apocalyptic vision that beats the crap out of every other such film made so far in this century. 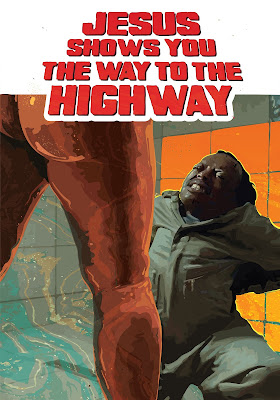 Jesus Shows You the Way to the Highway is different, more post-cyberpunk Afrofuturism than heart-felt-if-ironic lyricism, filmed in Ethiopia, Estonia, Spain, and other places where ordinary objects look strange and suggest a sci-fi future or alternate universe. Things about it are like video games, but not contemporary ones, all retro with the taste of obsolescence.

Back in the Seventies, I recall Star Trek/Twilight Zone/Logan’s Run author George Clayton Johnson saying that if you wanted to know what the future will be like, read Philip K. Dick.

So, are you a CIA agent in the future, or a guy in 1997 trying to make some cash? Do you want a pizzeria or a kickboxing academy? Do you dare to demand both?

Turns out that Jesus ain’t Jesus, Batman ain’t Batman, and Stalin ain’t Stalin. But anthropologists say that in so-called primitive cultures, when a person plays the part of a god they become the god. I’ve seen that it’s also true in our so-called modern civilization. All the newfangled technology just makes it more so. Cosplayers, please take note.

When I started writing this, I thought that I should include a warning that it is not a Christian film, but some Christians may interpret it as one. Others will just get their minds blown. Either way is a good thing.

Hey! Is that another new reality coming our way?