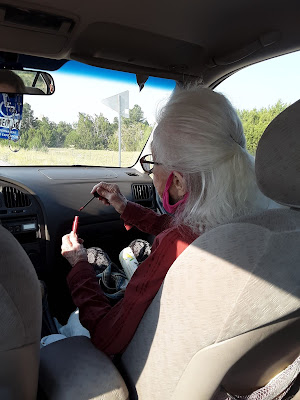 As we passed through the lava fields of El Malpais, Margaret said. “Lava, you can't fake lava.” And later “I can’t tell if this is a fake road.”

She was having a Philip K. Dick/zen kind of day, and talked about how everything was fake, the rocks, the towns.

Emily tried to assure her that it all was real. “How do you know it’s real?” Margaret asked. Emily couldn’t come up with an answer. 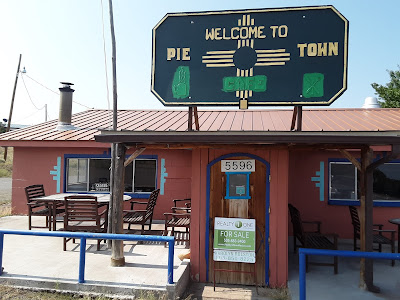 Pie Town, one of our favorite stops, had suffered in the pandemic. Several of the famous pie shops were closed, and the Pie Town Cafe--our favorite--had shut down and was for sale. 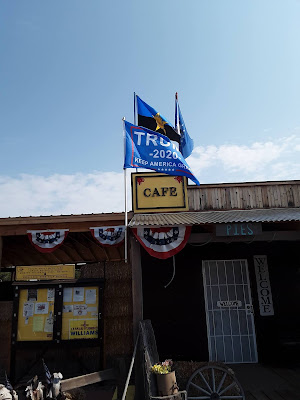 Luckily, across the street and down the road, The Gatherin’ Place was still in business, brimming over with character--and a few characters. The employees wore masks as required by law. There were also Trump flags flying out front along with the Stars & Stripes, and all kinds of photogenic New Mexico local color. I’m happy to report that they serve an excellent green chile apple pie. 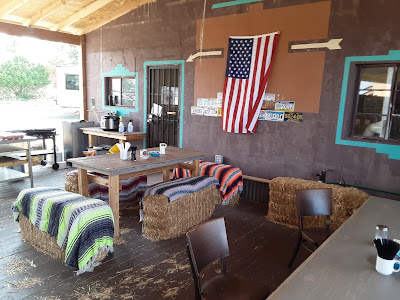 Margaret declared that “The pie is real,” even if the people across the patio weren’t.

Sooner or later, we all reach the point where just getting through the day is disorienting. It’s been even more so this year. 2020 may just make zen masters of us all. 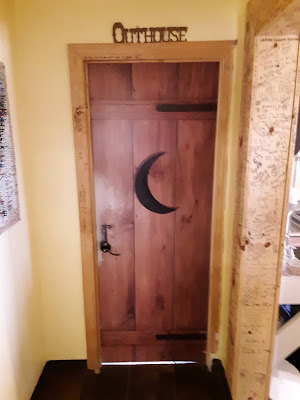 After that we did a driveby of the VLA. The visitor’s center was closed for the pandemic, but we could drive for miles through the wide-open, spacey forest of radio telescopes. Margaret loved it. We even stopped to take some pictures.

“Some day one of us will make contact,” said Margaret. 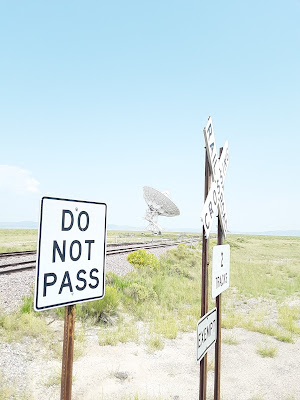 As we approached Socorro, Margaret reminded us that the name meant “help.”

It’s not as sci-fi as Grants, but has a MidCentury Modern Hispanoid/Aztlán charm you can’t get anywhere else. The two sides of the El Camino Family Restaurant--intact and sun-blasted--capsulize the unique atmosphere. We did pick-up there too. 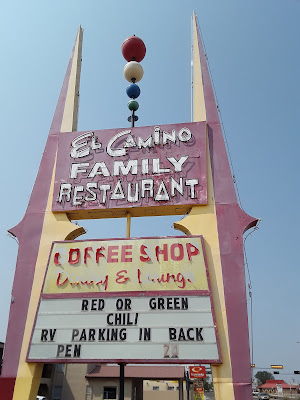 In the motel, the news told of a 6 foot asteroid approaching the Earth, two hurricanes, another police shooting, another riot, and Trump planning to announce a COVID-19 vaccine at a convention where loyalty to him is the only platform. It was like the one-party, one-candidate Soviet elections that my middle school social studies teacher told me about back in the Sixties.

Maybe Margaret was right. Maybe it’s all fake. Maybe it’s a new virus. The Everything-Is-Fake virus. In a few weeks no one will believe anything. And by November . . .

No. I have to stay focused.

Besides, if everything is fake, is there a real one somewhere?

Can you have a fake without the real thing? 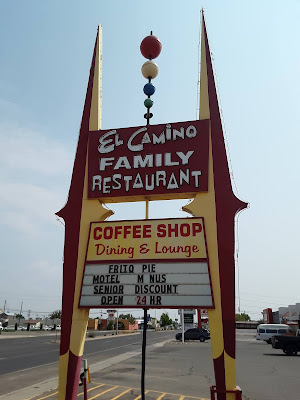 The next morning we got on the I-25 and took off for Santa Fe. A mist hung over the low hills, and there were signs: DEMOCRATS FOR PEACE, AMERICA WORKS BEST WHEN AMERICA IS WORKING, an electronic one flashing reminders to wear a mask, and the koan-like ZERO VISIBILITY POSSIBLE and GUSTY WINDS MAY EXIST.

I keep expecting to someday see one that says SHIT HAPPENS.

And an interesting piece of graffiti on an overpass: MARX. There was no indication of whether it referred to the Brothers, or Karl.

Aside from that it was mostly featureless flatland. “You guys know what this plain needs?” said Emily. “Radio telescopes.” 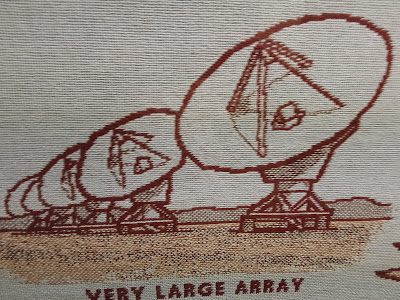 In Santa Fe, we stood at the Silver Saddle Motel, on Cerrillos Road. Margaret had the Lone Ranger Room, Emily and I had the Calamity Jane Room, and when he caught up with us, Emily’s brother Mike got the Billy the Kid Room. The rooms were suitably decorated with Hollywood memorabilia, and the hotel has some spectacular decorations by the renowned artist El Moises. 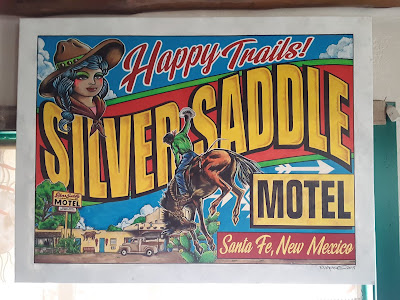 The woman who checked us in informed us that New Mexico Governor Michelle Lynn Lujan Grisham blamed the hotel and tourism industry for the presence of COVID-19 in her state, and that what we thought was mist we saw on the drive over was smoke from a large fire.

Was the whole world on fire? 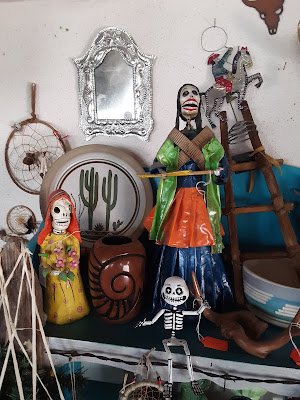 Wearing masks, as per Governor Grisham’s orders, Emily and I did some exploring of Cerrillos. At a Goodwill, I found an old Frederik Pohl novel, BlackStar Rising (. . . in the late twenty-first century, there is no President--not even a United States. China rules the Americas, and to most people “US” and “USSR” are just quaint abbreviations in historical dictionaries. Fun reading in the current situation), a mural and some signs to photograph. Emily found some clothes for herself and her mother. 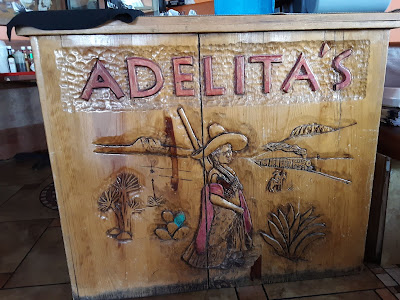 Next door was a lavishly decorated Mexican restaurant called Adelita's. Margaret said she wanted to dress up in nice clothes and go out to eat. This place looked promising, there was a big, beautiful patio, and the guy we quizzed said there was no need for reservations.

When he got Margaret dressed up and brought her over, the place was locked up and empty. Business was slow, and I could imagine a manager deciding to shut down and close early. We’ll try again next time we’re in town. If they’re still there. 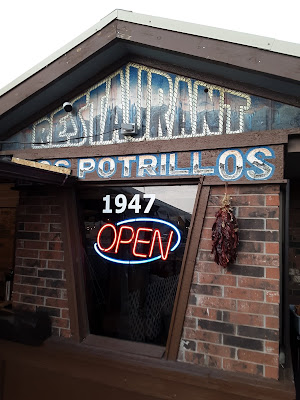 We cruised further down Cerrillos,and found a place called Los Potrillos. Not as fancy with the decor, but it did have patio dining, and they were open, and doing a lively business.The food was good,and Margaret had a good time. 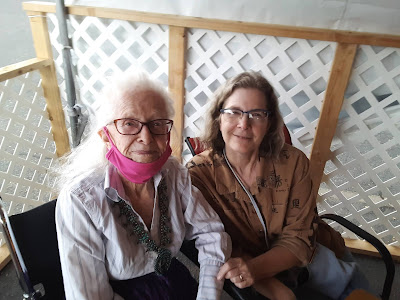 Santa Fe smelled smoky in the morning. The wildfire was still burning, training the big sky a duller shade of blue. It was also 61°F, a delight after the record heat in Phoenix.

Margaret was still having doubts about the reality of it all, saying: “Is this really a motel?” “I wonder if he’s real?” “He’s not real.” 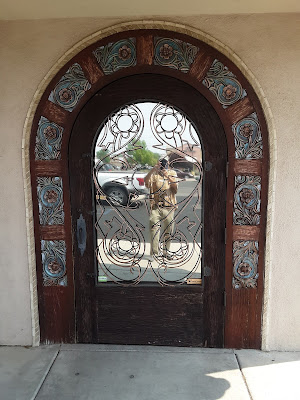 As we took off for Española, on a bridge over the freeway, two people held up flags. U.S.A. and New Mexico. There was no way to know why. 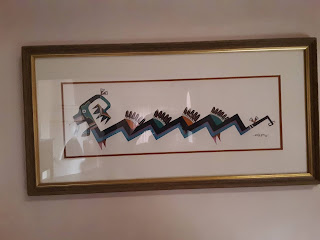 In Española, there were abandoned buildings, but also some new ones, it’s still like a big barrio that twists around the Rio Grande. Mike said the water was too muddy for fishing.

Oddly there was no outdoor roasting of green chiles. We encountered none during our entire trip. The roasters sat empty, unused. 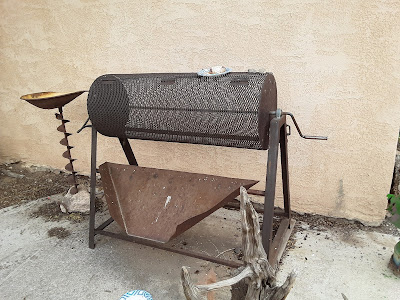 We checked into the fantastic Inn at the Delta hotel. It had a fabulous, if a bit overgrown (as were most places we saw) garden. Southwestern architecture and art were all over, even in the gigantic rooms. Our room was bigger than our entire house. 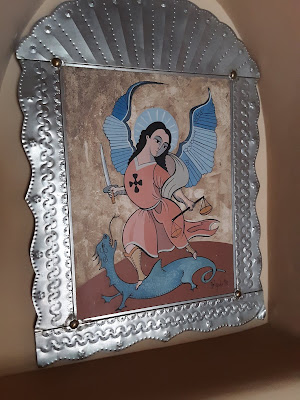 We enjoyed a cool morning while watching news of rioting in Wisconsin, insanity at the RNC, and oh yeah, hurricanes . . . 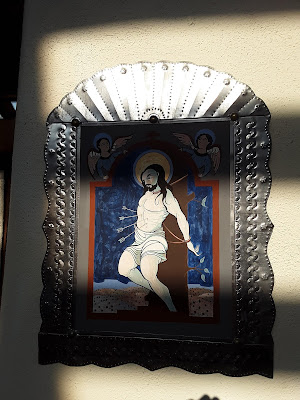 I wandered around the mostly empty, palatial hotel, taking pictures of the art in our rooms, the dining room, and lobby. There’s so much art that the manager says her son calls it “the museum.” 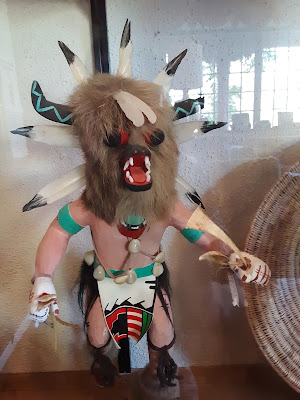 There was more than one depiction of a winged figure holding fish. The manager told me it was an archangel who had to do with bounty, and who sometimes is shown holding sheaves of wheat. A Google search revealed that the archangel Raphael is often shown holding or standing on a fish. He is the patron of travelers and pilgrims and is responsible for healing miracles. Next to the Inn at the Delta, is the public library, with a mural headlined ESPAÑOLA, WHERE CULTURES UNITE. 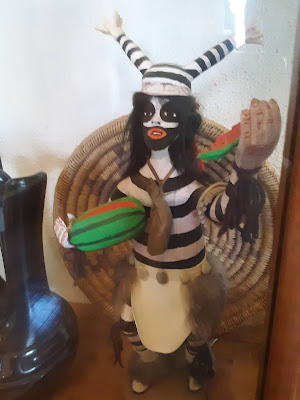 We took the scenic route to Taos.

Emily made us all open our pocket books when we passed the graveyard with the fake motorcycles, a custom she picked up from my mom. This is near Truchas, which still seems like home. 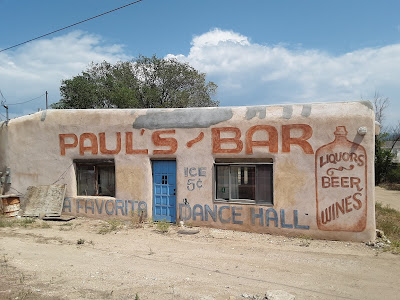 In Taos, the Paseo del Pueblo Norte was all torn up. There were lots of colorful, abandoned buildings, and places that looked abandoned, but had funky, hand-painted OPEN FOR TAKE OUT signs. Other signs included, HYPERBARIC OXYGEN & COLONIC, TAOS IS ART, ANDEAN SOFTWARE. 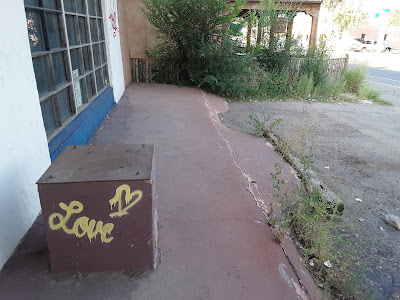 Pieces, one of Emily’s favorite thrift stores, where I have found some very strange and interesting books, was shut down.

The Sun God Lodge is still closed for repairs. Has been several years now. 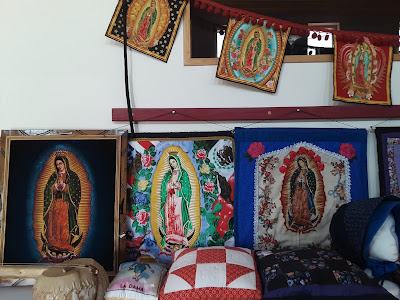 And the entire building with the cool mural with Billy the Kid with a bunch of arrows in his hat is gone. Not even the foundation is left. And six-foot tall weeds have had time to grow.

The road to the Taos Pueblo was blocked off with rubber cones and tribal police vehicles with flashing lights. 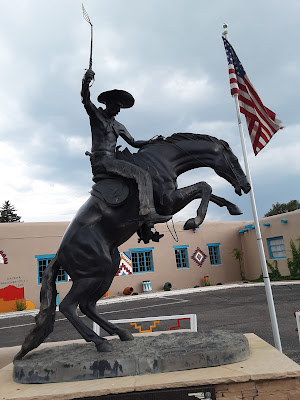 The clerk at the Kachina Lodge told us that business is dead.

They did have a lot of great Native/Southwest decor, and a full-sized equestrian statue by Fredric Remington as the token representation of Anglo culture (next to an American flag) out front. 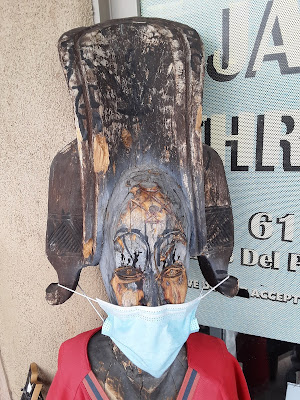 Emily took a stroll down the Paseo. I took a lot of Taos 2020 photos. We got bear claws at Michael’s Kitchen. The town is still worth visiting. 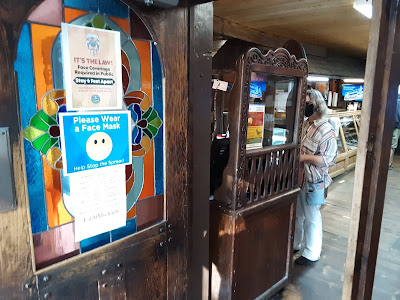 The next morning, Hurricane Laura and the Kenosha shooting blotted out the absurd RNC.

As we left Taos we whizzed past a place that had JESUS SALE signs up for years. The signs were gone. I think I saw a metal, rusty, centaur-like thing with a lot of arms. 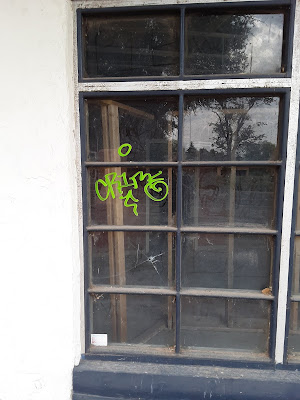