WHITHER GOEST THOU, ARIZONA? 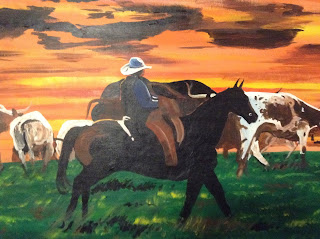 We left the house at 6 AM to celebrate the Revolution! And it didn't really matter which one. No plans. Just go. Just do it. We both had the day off, and we felt like playing hooky.

After grabbing coffee at the nearest Quik Trip, it was off to Sedona. Hot air balloons dotted the sky. Not much traffic for a holiday, but then it was early. 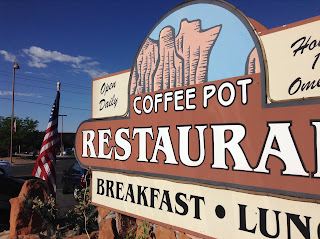 Made it to the Coffee Pot in Sedona at 8 Am. Had a buckwheat pancake fix among the fabulous faux cowboy and Indian décor.

Giant squirrels scurried around the Walnut Canyon National Monument. I got a Lifetime Interagency Senior Pass—the National Parks and Monuments are now mine! We also climbed down into the Sinagua ruins, remembering Arizona's original cultures. As we left, a raven big enough to carry off small children lurked around the parking lot.

We keep running into giant ravens the rest of the day. 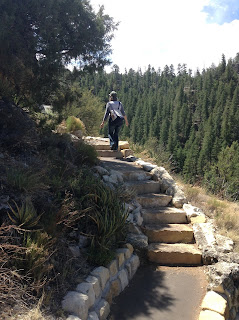 In Flagstaff, we hit some antique stores. Em bought the Asian painted screen of her dreams. I got a paperback copy of Bob Dylan's Tarantula, while Johnny Cash sang Hank Williams songs. 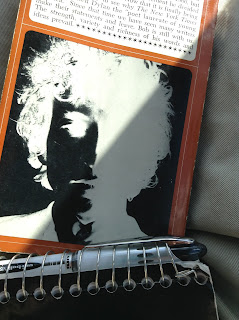 Back towards Sedona, it got crowded. You'd think there was a national holiday going on. Oak Creek Canyon was a mob scene. I said, “Nothing like getting in an good, old-fashioned, all-American traffic jam on the Fourth of July,” and scanned some of Dylan's post-beat, pre-hip-hop bop prosetry.

Beyond Sedona, the crowds dwindled away to nothing and we had the road to ourselves again, for a scenic, meditative drive through hippie country, Cottonwood, Jerome . . .

There were lots of squashed skunks and bunnies in the roads. 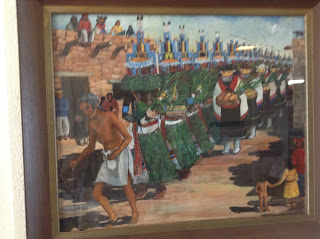 In Prescott, people wearing stars and stripes were swarming along Whisky Row. A ritual was impending, perhaps sacrifices were needed. We kept moving until we got to Bill's Grill, where we got burgers like good Americans.

Em had the BBQ, while I went for the Black & Blue Buffalo.

The roads were empty as we drove through the rocky, jagged, cactus-studded landscape obscured by hazy mist through the funky, pre/post-apocalyptic semi-ghost towns under saucer-shaped clouds. Sometimes the flags were at half-staff, other times they were not. Where was everybody? Had the world ended? Was the Metro Phoenix Area now a smoldering, radioactive crater? Does this continent/planet/universe give a damn why all us cosmic parasites keep torturing and killing each other? 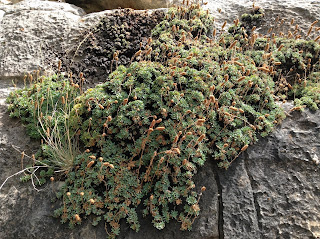 We didn't see many political statements. A TRUMP PENCE bumper sticker on way up. A BERNIE on the way back. Both artifacts from 2016. Are people getting sick of it all?

A Confederate flag flew in front of a fake, theme-parkish compound.

“I felt excited about leaving town,” Emily said, “and now that we're going back, I feel the same.” 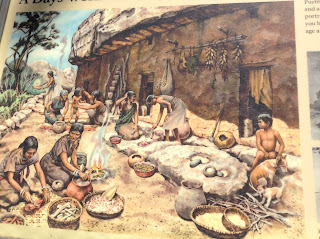 The traffic never got too thick as we approached Phoenix from the west. Sun City and Surprise looked like a pre-fab Mars Colony, built in advance by nanodrones, waiting for the colonists to arrive, and argue if the first press conference will be from McDonald's or Starbucks . . .

It's all a perfect setting for Chicano/Latinoid extra-fiction--or our lives.

Before sunset our neighborhood sounded and smelled like a war zone. 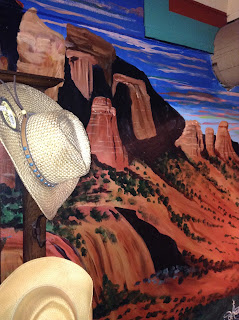