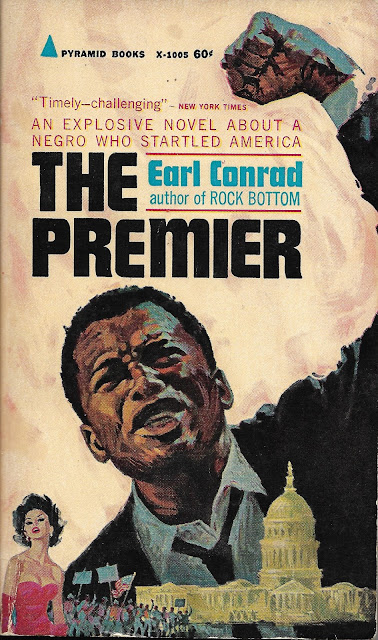 I found it at the Brass Armadillo Antique Mall, among some vintage science fiction. The ancient paperback had a black man who looks like a disheveled, pissed-off Sidney Poitier raising a clenched fist on its cover. There was also a headline: AN EXPLOSIVE NOVEL ABOUT A NEGRO WHO SHOCKED AMERICA. On the back cover: “the black republic --thousands of square miles carved out of the Middle West, a new nation for America’s Negroes . . . And the day came when Elmo Baines’ dream shocked the country and brought him to the White House to demand its fulfillment.”

It was The Premier by Earl Conrad first published in 1960.

It’s told from the point of view of a white linotypist (do I have to explain that?) who befriends Elmo Baines, a Black Nationalist visionary, who later goes by Simba.

I had to check. Was Conrad black or white? Black writers used white viewpoint characters back in the 19th century, and the practice went on well into the 20th . . .

Turns out Conrad was white. And the surname was originally Cohen. He was the Harlem Bureau Chief for the Chicago Defender, and  wrote a lot of books on African American issues. No wonder he was inspired to write this three-dimensional portrait of a Harlem visionary detailing his struggle to create the Central Plains Black Republic, financing it with the invention and selling of Wondercream, a hair straightener. 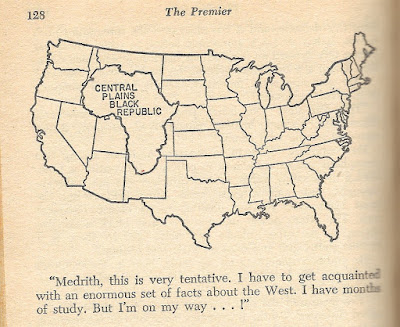 Taking place from the Forties to a 1970 in a universe where the Sixties civil rights movement didn’t happen, it throws around and explores ideas and concepts that some would consider to be dangerous today. They send the mind soaring to places that modern commercial sci-fi avoids.

I suspect that the genius/tragic hero Elmo Baines was based on a real person, or maybe several. He and his ideas and thinking ring true. Conrad was a reporter, and a lot of this reads like journalism. This story could have happened.

It doesn’t quite break the speculative fiction barrier. The Republic doesn’t happen, making it more like Hank Lopez’s Afro-6, where black militants don’t succeed in their attempt to take over the island of Manhattan, than Sam Greenlee’s The Spook Who Sat By the Door, that ends in the creation of Black Nationalist nation, or George S. Schuyler’s Black Empire, in which Africa is taken back by blacks and Europe is crippled. But it still deserves a place as a proto-Afrofuturist classic.

There are flashes of the world Elmo Baines is trying to build. This is from a dream sequence:

Two huge white eunuchs stand on either side, and they are fanning me with newspapers on which are blazoned headlines about the latest exploits of Premier Simba.

Of course, transformation of a dream into reality is not easy; dreamers often die trying to make their dreams come true, and the novel shows this.

And the science fiction writer in me would like to see what would have happened if Elmo Baines had succeeded. The same with the militants in Afro-6. What would those worlds be like?

Imagine sequels for them, and Black Empire, and The Spook Who Sat by the Door, taking place a generation of so after their revolutions?

Maybe some young Afrofuturist writers could take on these projects . . . 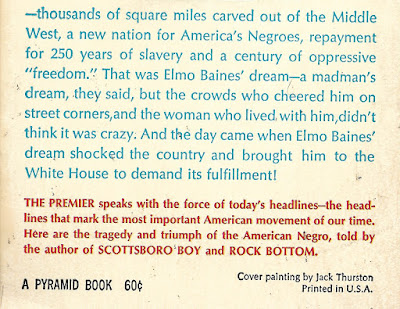