NOTES ON MY ART IN “MARIPOSAS” AT THE BEMIS CENTER 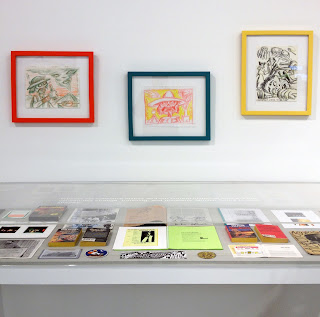 In case you haven't heard, some of my artwork (and my novels, and a magazine article I wrote and illustrated about the PreColumbian ball game) are on display in Omaha, Nebraska. They're in an exhibition called Mariposas: Brown and Native Contemporary Artists in the Path of the Butterfly at the Bemis Center for Contemporary Arts. This is because Josh Rios and Anthony Romero included them in a project they call Is Our Future a Thing of the Past?

Thanks guys. I appreciate the support.

I'd also like to thank Josh for recently introducing me to the term Xicanxfuturisma. I like the alien look of it. It will be useful.

Meanwhile, here's some background on the pieces displayed: 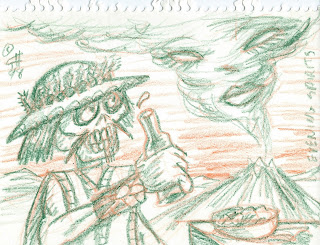 Evening Spirits is a drawing in Crayola crayon (they suit my drawing style, and I like the idea of using non-fine art materials with a childish reputation). There's a calaca, or calavera if you want to be more formal, in Native-style, shamanistic clothing, sitting before a bowl of something possibly edible. He raises a bottle of an alcoholic or otherwise mind-altering beverage to a goddess who is manifesting in the smoke spewing from a volcano. The calaca looks like my fabled Calacanaut, and maybe a relative, or more earthly/spiritual incarnation. 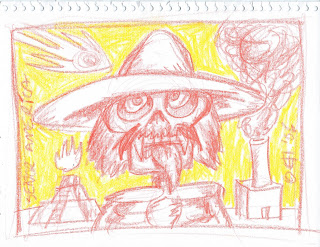 Señor América (the accent is in the wrong place in the drawing--I do that, dyslexic mestizo that I am) rendered in red Crayola with a yellow grease pencil for the blazing sky. This sombrero-wearing calaca looks like the one from Evening Spirits, but was drawn years later. We are all skeletons under the skin. He stands at the border, kind of like one of Frida Kahlo's famous paintings. One side is cosmic with a meteor/comet thing, and a flame-crowned pyramid, the other is a factory that is mostly smoke-stack. He has fangs and sticks out his tongue. 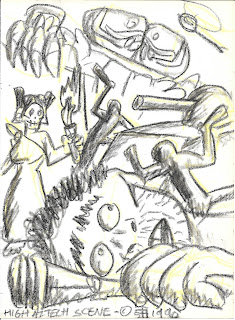 High Aztech Scene was drawn when I was writing High Aztech. It was first sketched in yellow grease pencil, then finished in black grease pencil. Xolotl Zapata clutches his zumbador and is watched over by skull-faced disease-spirit who is armed with a flaming test-tube, while rioters attack a tank. Coatlicue oversees like a an intellectual kaiju. The mood and some of the ideas from the novel are suggested, like a postmodern cartoon/hieroglyph. 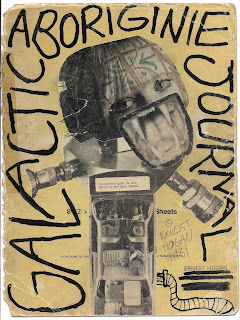 Galactic Aboriginie Journal is one of my battle-scared sketchbook covers from back in the days when I was struggling, and not sure if my efforts would ever amount to anything. I was trying to merge the primitive with the modern. We are the aboriginies of the galaxy. The lettering and drawing were done with the stopper top of an India ink bottle. I collaged an idol by drawing crude designs on a fashion model's hair and giving her an animal mouth, mounting her on machinery, with a car loaded with a typical American family for a body. Instead of breasts there is a fortune cookie prediction: “Unexpected gain. A new friend in the near future.” 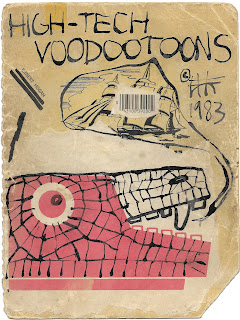 High-Tech Voodootoons is another decaying sketchbook cover. The title is a good description of what I do, whether I'm writing or drawing. The snake head was made from the logo of a package of typewriter paper. (Uh-oh, do I have to explain what a typewriter was?) Once again I was drawing with the stopper from an India ink bottle. The sailing ship was part of the original sketchbook cover. The barcode was from typewriter paper. I like the way these things have gotten so bashed-up, looking like artifacts from some strange, ancient, lost civilization, and how any explanation can never convey to whole truth.

Everybody's future becomes a thing of past, eventually. All our cultures are tomorrow's archaeology. 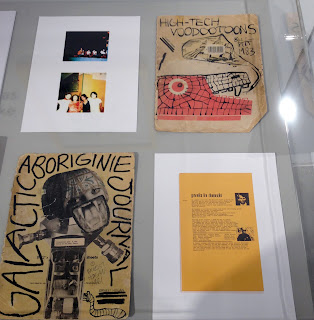