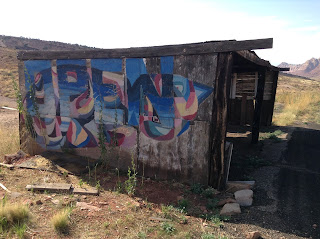 Large, colorful bug-splatters decorated our windshield as we drove out of a Route 66 sunset partially obscured by a rainstorm – that also blotted out one sun dog – as we arrived in Flagstaff. We had planned this getaway some time ago, by coincidence we got out of Phoenix as the political conventions were ending, and the fallout was settling in. Just in the nick of time . . .

The parking lot of the Mountain View – that actually had a view of a mountain – triggered déjà vu. Then Ganesha seals in the office proved it. We had stayed there before.

We had Zipburgers at Miz Zips, a little further along the Route. The other customers were Latino/Indianish guys in baseball caps, and French tourists. We hear a lot of French in Flagstaff. 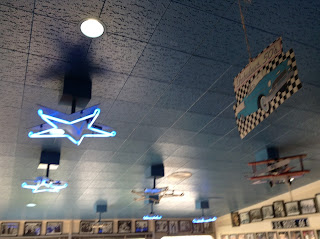 The next morning we had breakfast at the Galaxy Diner. Flapjacks! Fabulous edible saucers. We didn't give them the opportunity to fly away.

We keep ending up back at the Galaxy. Maybe it really is a galactic hot spot, with travelers from all over the Milky Way chowing down on authentic American food among the Hollywood and Rock 'n' Roll memorabilia. The hot rods and motorcycles are really timespace vehicles.

Then we headed north up Highway 89A. 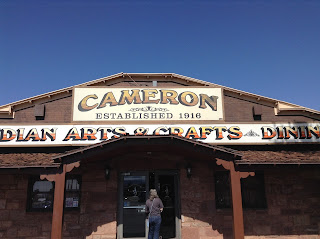 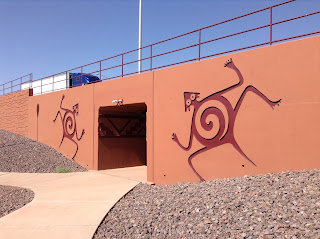 By the Navajo Bridge, sacred datura was in bloom. 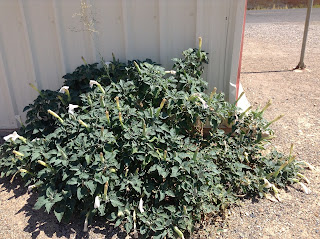 Back on 89A, it was quite relaxing. “The Big Empty," Em called it. No sign of political turmoil, so far . . . A dead porcupine bristled on the median. Then a live deer scurried across the burned-out, growing-back forest. In the distance, rain came down in misty, gray shafts. We almost ran over a chipmunk. Finally, we hit the rain, and a sign warned us of bison. 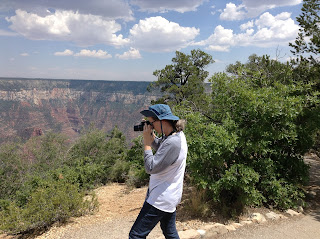 Then we reached the North Rim of the Grand Canyon. A little boy said, “I can't wait to go back to flat, safe Texas.” The Canyon was more than the human brain can take in, as it should be. 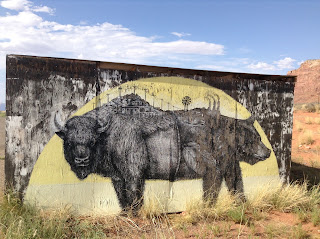 On the way back, I took pictures of the rural murals on the shacks on the Navajo reservation until the light went bad. 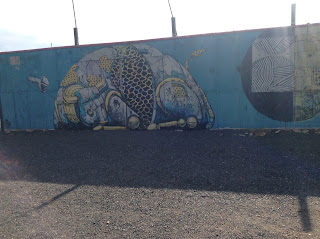 We had dinner at the Galaxy Diner, with live country music from yodeling, fiddle-playing cowboys.

And the next morning we had breakfast at the Galaxy. Nick Drake's “Black Eyed Dog” played as we came in. We got the same table – three times in a row! Could it be some kind of mystic mumbo jumbo? 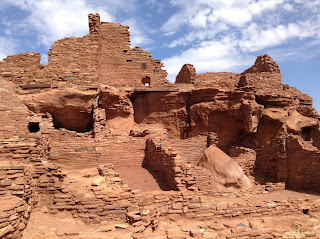 Then we visited the ruins at the Wupatki National Monument where signs warned: The removal or disturbance of any natural feature is prohibited. 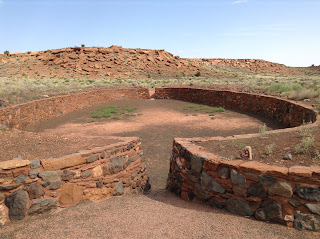 There's also a preColumbian ball court. Research for that gonzo fantasy novel. All roads lead to unfinished projects – or new ones.

Near the Citadel, colorful collared lizards hung out. The mating season must have still been going on. 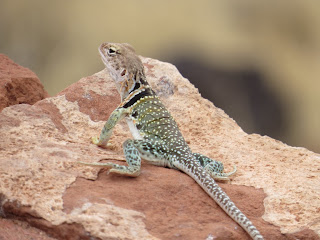 In Sedona we grabbed mochas to go at the Java Love Cafe, which is hippy-dippy and across the street from the Coffee Pot.

We tried to have lunch at the skeleton-festooned Haunted Hamburger in Jerome, but there wasn't any parking on the twisty, mountain streets, and it was packed. “Funny thing about paradise,” said Em, “it's always crowded.”

So we had burgers at Bill's Grill in Prescott, on Montezuma Street, that is also Whisky Row and Highway 89. I got an idea for a Trump cartoon. Could a combination skull & crossbones/mushroom cloud work? Is it too subtle for propaganda? The problem is Trump is already such a cartoon, you can't really lampoon him.

I was thinking about that as we drove through Prescott, and Em noticed how white it all was. Another town where all the favorite corporate franchises have been installed so retirees from the American heartland can move in and feel right at home. Someday there will be such places on Mars if we don't watch out. 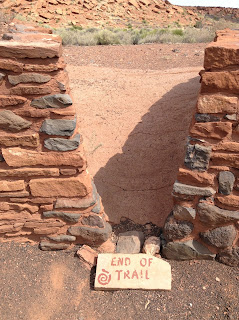