The brown-skinned Asiatic man looked out the porthole at the heavily armed cacti that had surrounded the limo.

"How on earth did they find us?" he said.

His blonde companion screamed into the intercom at the driver, "Get us out of here."

The limo lurched into a dust-vomiting start. I was thrown back into the seat that I was strapped into. The g-forces made my headache explode. I grabbed my head; it was covered with bandages -- what had these people done to me?

Through the windshield and portholes and cloud of dust I could see saguaros firing their assault rifles, running for cover, and tumbling over the limo's hood.  They were rather funny-looking saguaros -- too fat and squat to be real, but about the right size for an average-sized human to fit inside. Years ago, when I was but a child, not yet the Flash that I am now, I saw a news report about how somebody in Washington had the brilliant idea to dress DEA agents in saguaro suits along the border to stop smugglers from bringing drugs into Arizona. I laughed, but then I was young, and still believed that the world made sense.

Soon the driver was making some impressive high-speed turns through suburban-looking streets. So, we hadn't left Phoenix after all, we were in one of the mountain preserves, probably not far from the heart of town. This is the sort of city that gives you the impression of being in the middle of nowhere in certain pockets.

"Head for the freeway," the man said in his L.A. Accent.

The limo soon charged up an onramp. I imagined Wagner's Ride of the Valkyries as suitable background music. Like the helicopter assault in Apocalypse Now.  Or the Klu Klux Klan coming to the rescue in Birth of a Nation. My blood ran cold, but it didn't help my aching head.

"How are you feeling?" asked the blonde woman, her German accent sounding so European and civilized.

"I've always found freeways to be good places to talk," said the man, "especially at 60 miles per hour and up.  Do you feel like talking?"

The woman took my hand. The man picked up an oversized pair of chrome-plated pliers and aimed them at my nose. 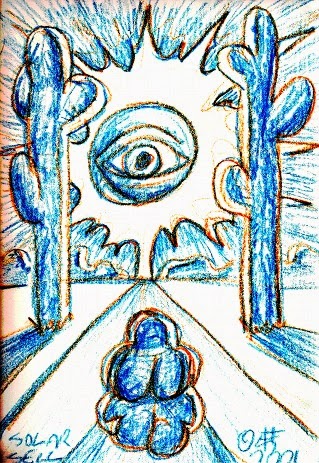