After a few centuries of cool, sticky darkness I figured that I wasn't dead, but somewhere, somehow, somebody was doing some serious messing around with my body and brain.

Then my mother was there, cradling my head in her lap, picking chunks of asphalt out of my exposed brain with plastic chopsticks, saying, "I always told you to wear a helmet, but no, Flash, you never listen to me. Tisk, tisk!"

Then she changed into Doc Burnout, who dug into my gray matter with a crusty spork, saying, "Nothing like a fresh pineal gland to chase those blues away!"

Then there was light. Bright, painful light. It gave me a murderous headache, but did prove that there was a little more left of me than brainpan fallout. I hoped.

"How many fingers am I holding up?" a sexy female voice asked. It had a German accent.

There were fingers in front of me. They were long, thin, soft and pink with nails the color of a TV set jammed between channels.

"How do you know Rudolph Brunhoff?" asked another voice, this one with a distinct L.A. accent.

The man with the L.A. voice -- who was either a suntanned Asian or a Hispanic or Native American -- nodded and said, "What do you know about Project Brainboost?"

"What?" I answered, fixing my eyes on a nearby porthole. We were in a stretched limo, outside was the Sonoran desert -- we couldn't be far from Phoenix -- with lots of saguaro cacti.

"How about the Krell chip?" asked the woman, who was a beautiful blonde with hair like a silk helmet.

"Hunh?" I said. The saguaros were moving around. Some of them were holding things.

"You better be more cooperative, or things could become unpleasant for you," said the man.

Then he pressed a button causing a section of imitation wood paneling to slide open, revealing an array of diabolical-looking medical instruments.

The things the saguaros were holding were assault rifles, and they were pointing them at us.

Suddenly, an amplified voice said, "GET OUT OF THE VEHICLE. YOU ARE SURROUNDED. RESISTANCE IS USELESS."

NEXT WEEK:  ATTACK OF THE SAGUARO PEOPLE 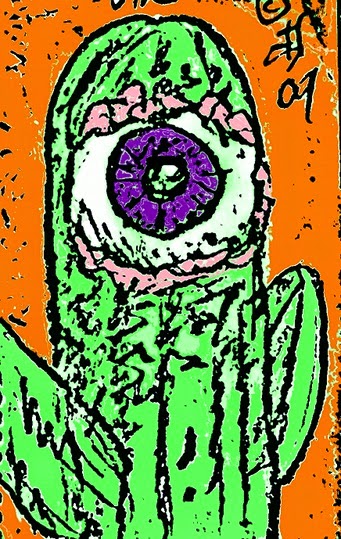