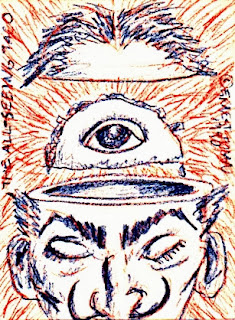 Memories . . . they tend to fade. You never know what will bring them back. And when they do, it can be hard to document them, make them history. Sometimes you have just let them become legend . . .

Like when I was watching Disney's Fantasia with Emily not long ago. We were enjoying the Stravinsky Rite of Spring sequence, the one with the dinosaurs, and memories floated up out of the murky recesses of my brain:

It was of my paternal grandfather, Grandpa Hogan. He did art projects for the WPA during the Great Depression, drew the California missions, and told of “going to the museum to draw prehistoric animals for Walt Disney.”

The timeline puts it about right – there's a possibility that the Fantasia dinosaurs were based on drawings he did!

Luckily, I asked my Aunt Teri:

I remember the stories! The same way you mentioned them. I always thought the same about the Fantasia dinosaurs. I remember him telling us that the work was temp and Disney offered him a permanent position at lower pay than another offer he got, and he took the better offer. Said he had no idea that Disney studios would become so successful.

Did he have any professional art training?

No. He just loved it. I do remember him saying that his mother kept the kitchen table covered with an oilcloth table cloth. You know the kind that had a plastic-like top and a soft cloth underside. My grandfather used to flip the cloth edge up and sketch while he drank a beer after dinner. Your Grandpa said he would keep moving around the table and sketching the underside of the cloth until it was full and then Abuelita would get a new one. This after-dinner activity was something both your Grandpa and his dad did. Art runs in the family. Your grandpa said that his dad sketched mostly wild west art and often some renderings of the old L.A. streetcars, he was a conductor on one. 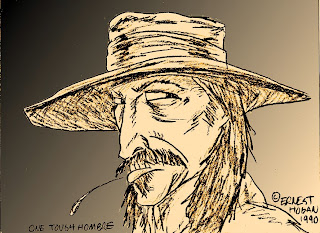 What other education did he have?

He graduated from Montebello High School. I'm not sure what year but I think it was around 1929 or 30 maybe a year or two later. He was on the gymnastics team! He did relate a story of one of his teachers, a Mr. Carter, who was the brother of Howard Carter who discovered King Tutankhamun's tomb in Egypt. Grandpa said his teacher brought letters to class that he read from his brother, Howard, while the actual dig was going on. This will give you an idea of the time period.

History reached out and touched Grandpa Hogan, all the way from ancient Egypt!

There's no documentation. The Hogans have never been big on documentation. Grandpa used to say he didn't have a birth certificate because “the church burned down.”

So like in John Ford's The Man who Shot Liberty Valance:

“This is the West, sir. When the legend becomes fact, print the legend.”

Print the Legend
The Man Who Shot Liberty Valance — MOVIECLIPS.com
at 8:39 AM