At 6 A.M. we were still in Sheriff Joe Arpaio's jurisdiction. A guy was walking down a street carrying a case of Tecate, ready to face a blazing Wednesday in Phoenix.

Soon I spotted datura growing alongside Highway 17. Plaster dinosaurs, concrete teepees, and abandoned structures decorated with colorful graffiti – the new ruins – informed us that we were on our way to the Petrified Forest, the Painted Desert, and the Big Rez. At a rest stop, a sign warned: POISIONOUS SNAKES AND INSECTS INHABIT THIS AREA.

We were still in Arizona.

Then the road signs started to read like Zen koans: ZERO VISIBILITY POSSIBLE . . . GUSTY WINDS MAY EXIST . . . We had crossed over into New Mexico.

Sky City Casino sounded like something out of a reboot of Flash Gordon to me. Even here, infernal corporations are messing with our mythologies.

Los Lobos were playing at the Buffalo Thunder Casino.

These have to be the prettiest graveyards in the world. And they're everywhere.

I couldn't help imagining vampires and zombies rising from those colorful graves.

When the sun set, it made the storms clouds look like they were raining fire. 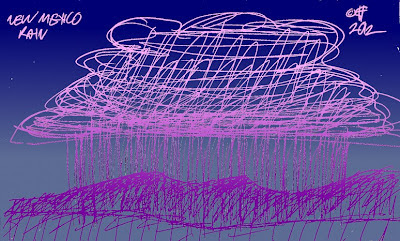 The neighborhood rooster was time-warped. He crowed late, and at various times during the day.

A cow mooed at dawn, though.

At least the rooster isn't crowing in the middle of the night – that would be scary . . .

But then this is the homeland of La Llorona and El Cucuy. There is even a local version of bigfoot. And that Internet Age media-upstart El Chupacabra keeps showing up in the mysterious New Mexico night.

Coyotes visited us after midnight. They made different sounds than Arizona coyotes – I wasn't sure what they were at first. They seemed to be talking, and they had a lot to say.

Later, the cow mooed at the rising sun, again. 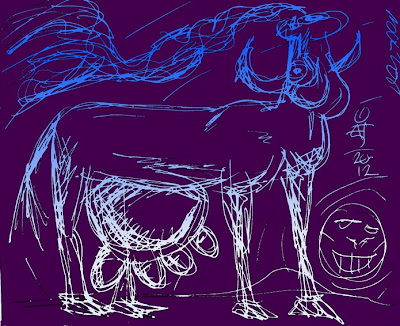 We saw the tiniest roadkill ever on the road to Española: some kind of rodent, in perfect condition. The vehicle must have just missed it, causing it to die of fright.

Graffiti told us that a twisty, tree-lined stretch of mountain neighborhood was the home of WILD BOYS! The exclamation point was part of the name.

Not far away, a sign warned: YOU ARE BEING VIDEOTAPED BY NIGHT VISION DIGITAL CAMERAS.

Later in Española, another sign proudly announced that Blake's Lotaburger was NOW UNDER 24 HOUR SURVEILLANCE.

There's so much in New Mexico, you could spend several lifetimes exploring it. Something like cryptids, extraterrestrial visitors, paranormal phenomena, or strange rituals could go unnoticed, blending into the complicated landscape like the casinos.

A mad scientist could set up a shop here and avoid publicity. These rural neighborhoods that look more like enchanted forests than small towns. Huge dogs cut you off in on a dead-end street and bark into your windshield. They know how to keep secrets here.

If you're lucky you'll escape around the next blind curve into national park-ish panoramic vistas . . . where there are life-sized crosses on some of the gnarled hills.

This was close to Chimayó, which was the center of activity – including flagellation and crucifixion – for Los Hermanos Penitentes back in the 19th century.

We also visited cliff dwellings in volcanic tuff that looked like a swiss cheese of carvable rock. Could Cappadocia-like subterranean cities be possible? And what about those rumors of underground UFO bases around Dulce? And the fantastic tunnels that David Hatcher Childress is so fond of?

Maybe a conquistador looking for the Seven Cities of Gold could have gotten lost in this tangled knot of spacetime, and find himself in a modern Indian casino. He'd just be another Spanish-speaking homeless guy. And there actually is a Cities of Gold casino, with an offramp, near Los Alamos, where you can get around via Atomic City Transit.

This really is the Land of Enchantment, as the license plates say. And the Land of the Weird as others say.

The Virgin of Guadalupe, the secret identity of the pagan Earth Goddess, is everywhere. I saw more shrines and statues in her honor here than in the Metro Phoenix's West Side.

Ravens were everywhere, too. We saw a lot of them sitting on poles as we went up to Taos to get coffee in the Zen Gardens of the Wired Cafe.

As we returned to our guest house, we found large, dead flies on the bed, and a dead bird by the front door.

I'm not able to decode whatever it means, but there is something going on in New Mexico, something that has been going on for a long time, way back to the to time of the Earth Mother, and the Ancient Coyote, and even before the forgotten reign of the Centipede God – that may be restarted any day now.

A millipede did greet us as we entered the Petroglyph National Monument . . .

And we encountered buffalo (okay, technically bison) on a nearby ranch where they are being bred in a kind of newfangled Ghost Dance. 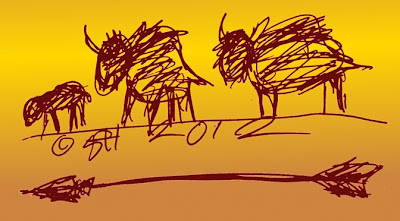 Too soon, it was time to go home, switching from traveling up and down El Camino Real – that goes south all the way to La Capital Azteca – to crisscrossing Route 66.

We saw the future as we passed the Petroglyphs Trails Subdivision, and signs for a CURANDERA – ESPIRITISTA and the NEW MEXICO GLADIATOR DASH. And ¡Traditions! “A Festival Marketplace” had flying saucers painted on the walls of its diner.

Back in Arizona, on the Navajo reservation, in the middle of an empty field, a chipped and faded sign read: METEORITES 50% OFF.