THROUGH TIME AND TIMBUCTOO WITH TAHIR SHAH 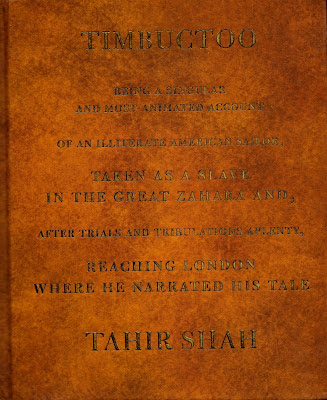 I love Tahir Shah's books. They are travelogues that read like fantastic novels. He is a master storyteller. I wondered what it would be like if he wrote fiction. His latest book, Timbuctoo – I'm happy to say, proves him to be an excellent novelist.

But then, this is a true story, that of Robert Adams, “an illiterate American Sailor, taken as a slave in the Great Zahara and, after trials and tribulations aplenty, reaching London where he narrated his tale,” to quote the cover that, in words, does the book more justice than any image could.

Shah admits: “I am no historian, and have massaged facts and fictions into place, re-conjuring history.” Which, of course, in how great fiction is made.

Though set in 1815, this novel will sweep 21st century readers along with its smooth style and an ingenious, interweaving, Arabian Nights storyteller style that zigzags from Timbuctoo to London.

And this London is just as strange and exotic as Timbuctoo:

With Caldecott at its helm, the African Committee was, in Adam's mind, little better than King Woolo's regime. Both men were repressive in their own way, champions of avarice and perversion.

It does for time travel what Tahir Shah's nonfiction books do for global travel. And even though it takes place early in the steam era, fans of steampunk will find their universes rocked when they read it. It makes the alien planets of most space operas look dull.

Having just returned from wandering the supposed location of North America's Seven Cities of Gold, Timbuctoo has the sci-fi trickster in me fantasizing about rumors of cities of gold on Mars . . .