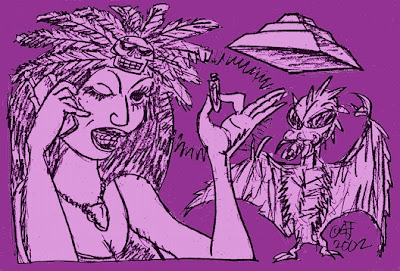 Suddenly, it hit me, like an orange gorilla dancing in front of a dazzling Arizona sunrise, my story "Burrito Meltdown" -- inspired by Sheriff Joe Arpaio -- is still available in the anthology Angel Body and other Magic for the Soul edited by Chris Reed and David Memmott, from Back Brain Recluse and Wordcraft of Oregon. Amazon even has a few used copies.
"Burrito Meltdown" is a wild romp about Arizona, illegal aliens, and UFOs, and it just as just as hip and relevant as ever thanks to Sheriff Joe and the Justice Department.
Here's how it begins:
A hyperscrambled satellite feed, from a CIA stealth saucer over Chiapas, Mexico:
Aerial view of unknown pre-Columbian ruins. On the top of a pyramid, priests in feathered headdresses commingle fresh blood from a male jaguar and a female human virgin.
The jaguar hisses. The virgin screams.
The priests look up, directly at the camera. One pulls a cell phone from under his robe and makes a call.
The camera zooms back to the horizon where a pyramid-shaped UFO appears. A beam of light lashed toward the camera.
The screen goes blank. 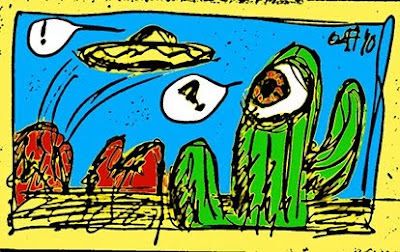