RAW FEED FROM THE BORDERS BANKRUPTCY 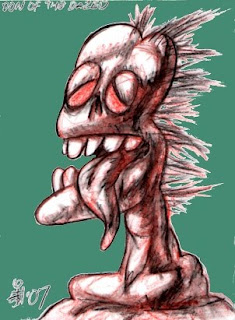 I can now say it. Yes, I was a Borders employee.

I've never admitted it here at Mondo Ernesto. I wasn't ashamed of it or anything. It's just that Borders -- on more than one occasion – had me sign a “document” promising that I would not reveal “confidential company information,” and they were especially concerned with this happening on blogs.

This is why I, and my wife Emily, have not mentioned where we worked, and have not evoked the name Borders.

However, as of quite recently, we are no longer Borders employees.

No, we didn't suddenly go insane and quit to pursue our personal interests full-time. The stores where we work were among those that Borders agreed to close as part of its bankruptcy.

It wasn't really a surprise. Working for Borders had become so Kafkaesque I was wondering if the folks at corporate were really giant cockroaches, madder than Captain Ahab chasing Moby Dick. Corporate gobbledegook was more important than profits. They were merrily throwing away millions while harping at us over nickel and dime issues. It was just a matter of time before the train wreck happened. We had gone down to working part time, and were looking for other work.

I was obsessively following Borders on the stock market and reading news stories, looking for clues as to what was going on. It was the most horrifying cliff-hanger I ever got caught up in. First, I thought this was just the antics of a flakey bookstore chain run by ex-hippies and English majors who didn't know any better, but soon it became clear that this is the way a lot of businesses are run these days. And if it continues, the results will . . . well . . . the word “apocalyptic” comes to mind.

I knew the bankruptcy was coming. What I didn't see was how widespread its effect would be. 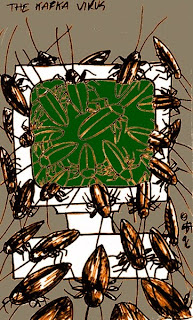 The morning of the bankruptcy, I woke up, reached for my iTouch, and got into the Stocks app, as had become my habit. There they were, several news stories saying that Borders had finally declared bankruptcy. I leapt over to the desktop and checked Google News, and stories about Borders were popping up faster than a raging virus.

We didn't think both our stores would be closed. Maybe only one of us would be left jobless. Certainly not both of us. I had once joked that maybe Borders would simply decide to pull out of Arizona completely – it seemed funny and unlikely at the time.

Then I found a list of stores to be closed. Both of ours were on it. And a lot of other Arizona stores, too.

I showed it to Em, saying, “I don't know how accurate this is.” You have to be careful in these situations. The first reports are usually wrong.

Other stories didn't match – as usual. An interactive map of the doomed stores had mine, but not Em's.

But eventually it became clear that both of our stores, and most of the Borders in the Metro Phoenix area, were not long for this world.

When Em called her store to ask what was happening, they hadn't even heard the news yet. Corporate didn't even bother to call them.

So – we are no longer Borders employees. For the time being we work for the liquidation company, manning the registers, doing customer service, and reshelving what is left of the merchandise. It's kind of like working in Hell after all the fires have been put out.

Our co-workers are shocked. No one thought that the “reorganization” would be so devastating.

Customers are shocked, too. They weren't plugged into the shitstorm. A chunk of their world – one that they enjoyed – has been torn away.

They keep asking me if I'm all right, and to tell the truth, I am. I have another job lined up. I have stories in Space Horrors and 2020 Visions and my contributors copies of Tales of the Talisman, with my story, “The Great Mars-A-Go-Go Mexican Standoff” and the galleys from Analog for “Death and Dancing in New Las Vegas” arrived this week. I lost track of the number of editors I am communicating with. I'll land on my feet, and go on in the brave new world.

But a lot of other people are hurting.

And now that I'm not a Borders employee, I am free to tell all. It'll make for some passionate blogging, and maybe an ebook.

Besides all the dirt on Borders, I have all these weird, funny adventures as a bookstore clerk that I can now share without fear of accidentally revealing any “confidential company information.” And I think we could all use some laughs. 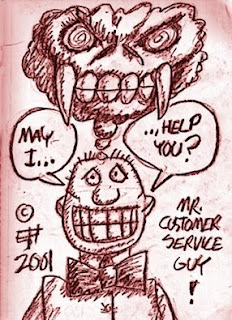